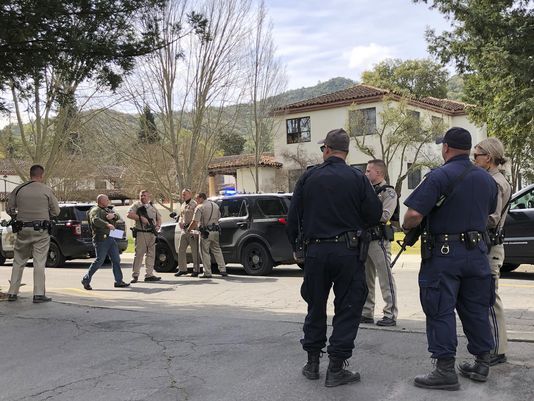 A gunman opened fire and is holding at least three hostages at the largest veterans' home in the United States, according to police and media reports.

Police in SWAT gear locked down the sprawling property at the Veterans Home of California in Yountville. There were no reports of injuries or deaths.

The Napa County Sheriff’s Department issued an alert to residents at 10:30 a.m. Friday warning them to avoid the area because of “activity at the Veterans Home."

The Napa Valley Register reported the gunman appeared to be wearing body armor.

Jan Thornton of Vallejo says her 96-year-old father – a WWII fighter pilot – is inside a hospital wing at the home.

She says her “heart just bleeds for the people that are being held hostage.”

Though she thinks her dad is safe, she is still worried about the stress of the situation, considering his age and that he has post-traumatic stress disorder and some dementia.

California's Veterans Affairs department said the home that opened in 1984 is the largest veterans’ facility in the United States, with about 1,000 elderly and disabled residents. Its website said it offers residential accommodations with recreational, social and therapeutic activities for independent living.

The grounds are also home to a 1,200-seat theater, a 9-hole golf course, a baseball stadium, bowling lanes, a swimming pool and a military Base Exchange branch store.

Yountville is located in Napa Valley, the heart of Northern California’s wine country.