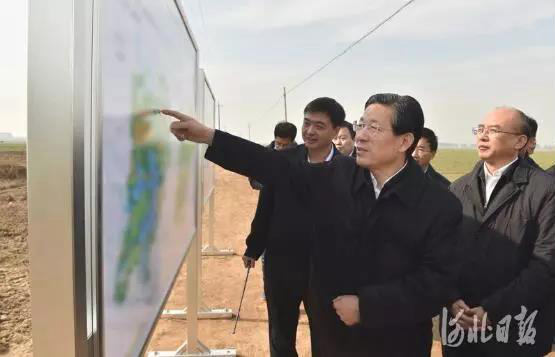 Top officials of Hebei Province stressed on October 31 the need for higher standards in building the Xiongan New Area based on the construction requirements stated by General Secretary of CPC Central Committee Xi Jinping.

During an on-the-spot inspection, Hebei newly-appointed Party Secretary Wang Dongfeng said the fact that the Xiongan New Area was mentioned in the Report of the 19th Communist Party Congress (CPC) National Congress shows the high attention and expectations the Central Committee with Xi Jinping at the core is giving it.

Wang stressed that departments at all levels must learn Xi Jinping’s Thought on Socialism with Chinese Characteristics for a New Era and put it into practice.

It’s a great task to plan and construct the Xiongan New Area by implementing the strategic arrangement of the CPC Central Committee and the State Council, Wang said.

Efforts should be made to push construction work steadily forward, and to stick to a global vision, international standards, Chinese characteristics and lofty goals.

The construction plan calls for priority to be given to ecological protection, green development and a people-centered development path, Wang added.

Supply-side structural reform and the process of industrialization in rural areas should be vigorously advanced so as to increase the sense of achievement and happiness among people in the New Area.

Wang stressed the importance of a stronger CPC leadership and improved mechanisms to guarantee the building of the Xiongan New Area.

The province will contribute to the New Area’s construction. Plans will be made to promote work in the short, medium and long term to ensure success.

Supervision and examination should be enhanced and major problems resolved.

Officials and the public should be given full play to guarantee all the tasks are completed on time and to make new contributions to realizing the two centennial goals and the Chinese dream of great rejuvenation, Wang added.

Governor of Hebei Province Xu Qin said that building the Xiongan New Area should follow the instructions of General Secretary Xi Jinping, focus on relieving Beijing of any function not essential to its role as China’s capital and stick to the forward-looking plans and high standards of the coordinated development of the Beijing-Tianjin-Hebei region.