Congratulations are pouring in from around the world after Xi Jinping was elected Chinese president by a unanimous vote on Saturday morning at the ongoing session of the 13th National People's Congress. 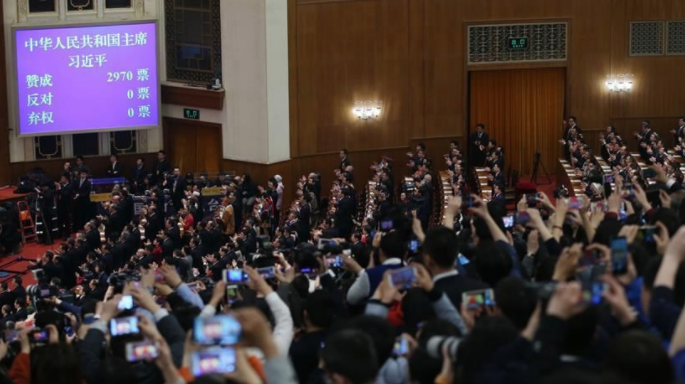 Xi Jinping is elected chairman of the Central Military Commission of the People's Republic of China at the fifth plenary meeting of the first session of the 13th National People's Congress (NPC) at the Great Hall of the People in Beijing, March 17, 2018. (Photo: Xinhua)

In their congratulatory messages, leaders of foreign countries, political parties and organizations expressed confidence that under Xi's leadership, China will achieve greater prosperity and make more contributions to world peace and development.

The following is an edited version of some of the messages.

Chairman of the State Affairs Commission of the Democratic People's Republic of Korea (DPRK) Kim Jong Un said he wishes that under the leadership of the Communist Party of China (CPC) with Xi at the core, the Chinese people will make greater achievements in the construction of socialism with Chinese characteristics in the new era.

He said he believes that DPRK-China relations will develop toward the direction that conforms to the common interests of the two peoples.

Vietnamese President Tran Dai Quang said he believes that Xi, as the core of the CPC Central Committee, president of China and chairman of the CMC, will lead the Chinese people to realize the goal of building a great modern socialist country that is prosperous, strong, democratic, culturally advanced, harmonious and beautiful.

He said he also believes that China will make important contributions to the peace, stability and prosperity of the region and the world at large.

The Vietnamese party, state and people attach great importance to the development of good-neighborly friendship and comprehensive cooperation with China, and regard it as the strategic choice and top priority of Vietnam's foreign policy, he added.

Lao President Bounnhang Vorachit said he believes that under the leadership of the CPC with Xi at the core, the construction of socialism with Chinese characteristics will make comprehensive and historic achievements.

Hussain said China has made remarkable achievements in the past five years, which has not only enhanced China's international status and image, but also brought great changes in people's lives.

Hussain added that he believes the great Chinese nation will continue to move forward and achieve the goal of national rejuvenation.

Pakistan and China are all-weather strategic partners, and the two countries will continue to commit themselves to comprehensively strengthening bilateral relations and benefiting the two peoples, Hussain added.

South Korean President Moon Jae-in said he wishes that under Xi's leadership, China realizes the Chinese dream as soon as possible and makes greater contribution to peace and development in Northeast Asia and the world at large.

With this year marking the 10th anniversary of the establishment of South Korea-China strategic cooperative partnership, Moon said he would like to make efforts with Xi to steer bilateral relations toward maturity and into a new era.

During the past 40 years, China has made remarkable progress, and the two countries have developed extensive cooperation, Abe said.

He hoped to take this year as an opportunity to improve the Japan-China relationship, taking it to a new level of development.