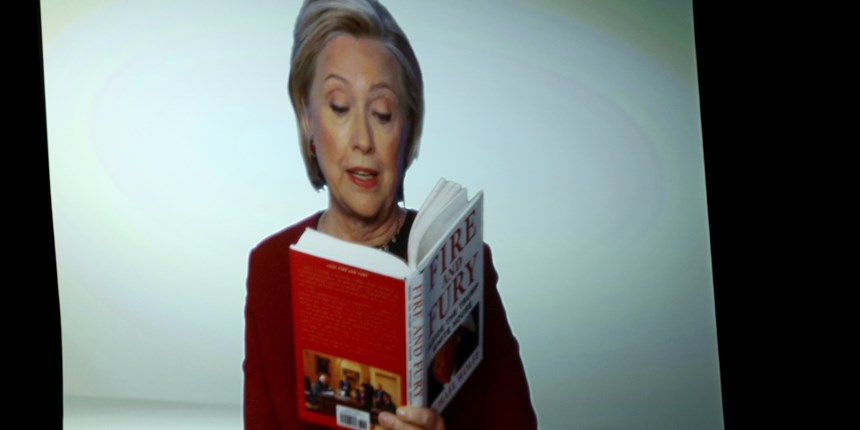 Screeshot of Hillary Clinton who reads excerpt from Michael Wolff's "Fire and Fury" at 60th Grammys on Monday.

Clinton, who lost the 2016 election to Trump, read an excerpt from the book about Trump's eating habits. "One reason why he liked to eat at McDonald's: Nobody knew he was coming and the food was safely pre-made," Clinton read.

Corden then praised her, saying, "The Grammy is in the bag." 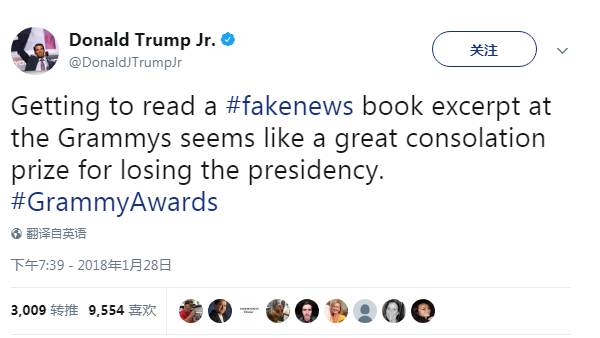 The president's family and members of his administration immediately criticized the segment.

His son Donald Trump Jr. tweeted: "Getting to read a #fakenews book excerpt at the Grammys seems like a great consolation prize for losing the presidency."

In a follow-up tweet, he added: "The more Hillary goes on television the more the American people realize how awesome it is to have @realDonaldTrump in office."

Nikki Haley, the U.S. ambassador to the United Nations, who is known to post on social media about her love of pop music, tweeted that Clinton's appearance "ruined the Grammys. Such a shame."

Wolff's book "Fire and Fury: Inside the Trump White House"became an instant bestseller on Jan. 5 when its release was pulled forward after published excerpts set off a political firestorm, threats by Trump lawyers of legal action and an effort to halt publication.

The book, dismissed by Trump as full of lies, depicts a chaotic White House, a president who was ill-prepared to win the office in 2016 and aides who scorned his abilities. It is based on extensive interviews with Trump's former chief strategist, Steve Bannon, and other aides.