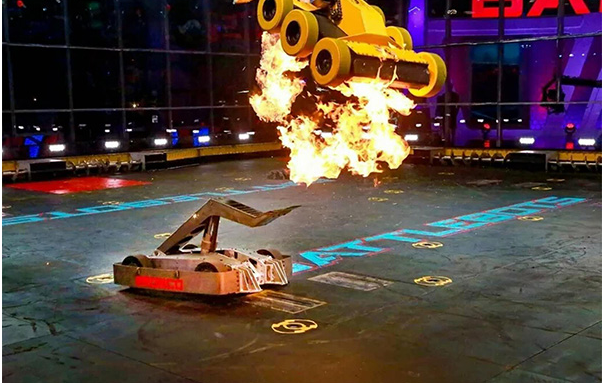 Over the last few years, Liu Dongsheng and his partner Li have taken China’s robot battle circuit by storm – proving their robot-fighting mettle against some stiff competition and earning themselves some serious prize money and respect in the process, the Paper.cn reported.Most recently the two competed in the 2017 Major League Fighting (MLF) My Bots Combat Robot World Cup with their bot, Rushing Bull Plus. However, they lost in a stunning upset after their robot got stuck in a fight against a robot named “Red Eye.”Most of the MLF’s teams come from major cities with robust economies and strong technological support. Some are even professional engineers. 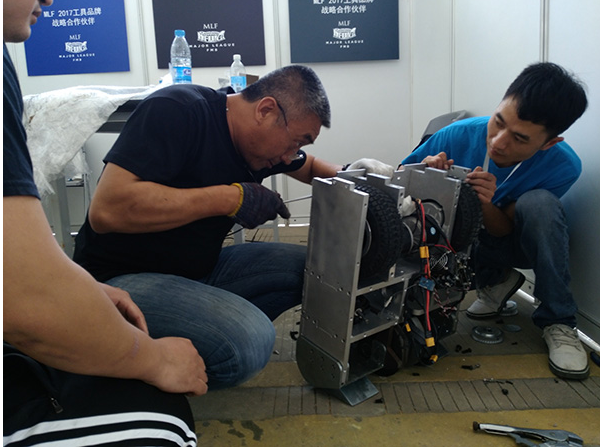 However, Liu and Li are oddballs in the competition based on their backgrounds.

According to the Paper.cn, Liu, 32, earns his living by planting bananas in a small town near the border of Yunnan Province, and Li is more than 50-years-old and currently unemployed. Even Rushing Bull Plus seems modest compared to the leagues’ other robots, which normally cost tens of thousands of dollars.Yet, Liu and Li’s backgrounds mean very little in the fighting ring, since they boast a strong knock-out record thanks to their robot’s ultimate weapon: the pneumatic ejection. This move can batter other robots by striking them with 4.7 tons of power.

Liu grew up in the rural area of Hekou county, which has a population of about 100,000 people. Liu’s love of robots was always ingrained in him, citing a fascination with RoboCop when he was 12 and then Robot Wars during the late 90s.Liu’s father, a retired teacher, wanted his son to start a career in education, but Liu was always hesitant about the career choice. After Liu graduated college and had trouble finding a job – he eventually relented and took a low paying job as a teacher.Five years ago, Liu finally decided to quit his job and start his own business, but his venture failed. He then started working with his relatives to grow bananas.Liu said this period of his life was a major disappointment.Liu’s dream was then reawakened when he saw the TV show BattleBots in 2015. It was at that time he decided he was going to build his own robot.

Liu scoured Facebook for a partner to help him build his bot and eventually met with Li when he was searching for someone who knew how to weld.Li had a hard time imagining Liu’s prototype when they first met, but Liu eventually convinced him of the advantages of a wheeled robot and the core of robot battle. Liu and Li then spent days and nights working on designing and constructing their robot. During this time, they were invited to China’s first robot battle competition.  Liu designed a 15 kg ejection robot for the competition. “That was the first generation of Rushing Bull,” Li said.Liu invited Li to attend the competition with him, where they placed third and won 10,000 yuan.

Liu is the main designer of Rushing Bull, but Li helped him enhance many details – making the Rushing Bull Plus strong and sustainable.The third generation Rushing Bull Plus, which battled from April 2017 to October 2017, was rarely damaged even after 15 battles. Although they got most of the parts for their bot from junk yards, their passion and spirit was what brought Rushing Bull to life.“We are indeed the lamest and poorest, but this is our result, and this is our honor,” Li said.Their biggest moment came when they won a national championship by winning 9 battles that took place over 14 hours. “We had to fix our robot after each battle, it was really fast paced,” Liu said. “But we never gave up on winning.”Both Liu and Li joked that the first thing they though about after winning the championship was that they could finally sleep.

“I think my interest in robot is going to change me completely,” Liu said. He said he never thought he could make his hobby his career, and he definitely never thought a man who comes from a from rural village could be given so much praise from thousands of people.Li said at times his robot battling interests have put a strain on his family relationships since his profession has not made him rich. Yet, he brushed off these concerns by saying that he was happy with his choices.“Yes, I need money, but I am doing something more important than money,” Li said. “I found my value at age of 50, and I shall fight for it.”Li is currently learning English, hoping to learn from foreign robot designs. Li also updated his social media status on New Year’s Eve, stating that he hoped that he could achieve more through hard work in 2018.