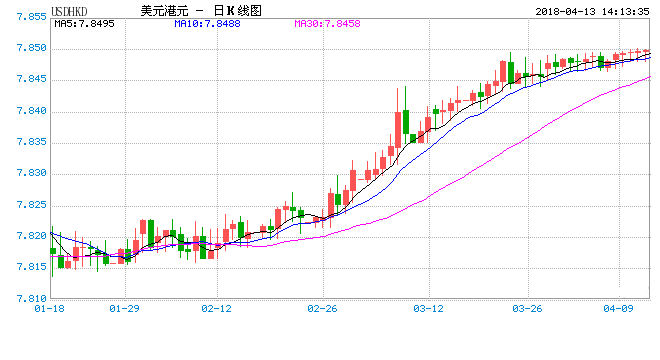 Hong Kong's de facto central bank stepped in to prop up the local currency Friday, as the city's dollar hovered around its lowest level in 33 years.

The Hong Kong Monetary Authority (HKMA) spent US$415 million to support the local unit as it touched the bottom end of its permitted HK$7.75-7.85 band for the first time since the range was introduced in 2005.

The authority's deputy chief executive Howard Lee told reporters there could be more interventions to defend the decades-old peg.

"On days when the demand for selling Hong Kong dollar is stronger, when the market cannot fully absorb such selling orders, we would see further occasions of banks asking the HKMA to buy Hong Kong dollar from them," Lee said Friday.

Under the city's Linked Exchange Rate System, the authority is required to buy the local currency at HK$7.85 to US$1 if local banks request it.

The Hong Kong dollar was linked to the greenback in 1983.

It has since served to maintain stability in the currency, in the face of numerous challenges, but is criticised by some people as leaving the territory at the mercy of Federal Reserve policymakers.

The HKMA has been forced to intervene to protect the peg on several occasions.

Among the biggest was in July and August 2014 when it stepped in 24 times, injecting a total of $9.7 billion into the financial system as the local dollar surged against the US unit owing to a flood of cash seeking access to China's booming market.

But the Hong Kong dollar has been falling in recent weeks as trade tensions have escalated between China and the United States, the world's biggest economies and key drivers of global growth.

- Bloomberg News contributed to this report -