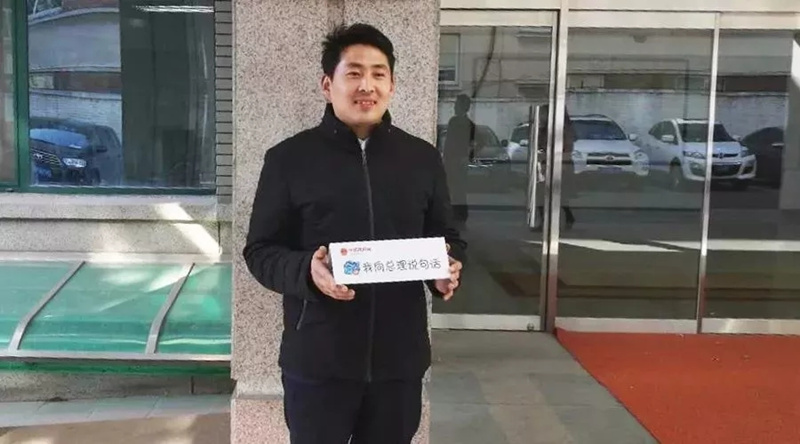 Deliveryman Li Pengxuan was on January 31 invited to tell Premier Li Keqiang about his suggestions on the country's delivery industry, after commenting online.

His words were first found on "Share your thoughts with China's Premier Li," an opinion gathering column on the State Council’s official website to invite public views and advice about China.

Li Pengxuan works at a branch of Best Express in northern China's Shanxi Province. He is not tired of working daily for 12 to 13 hours, but mounting compensation claims by customers forced him to express dissatisfaction to the highest echelons of government.

Four years ago, he quit his job in an auto parts factory and started a delivery franchise.

For what? Apples. His family orchard was very productive but experienced poor sales. So he started his delivery business, transporting fresh agricultural-produce to cities through e-commerce platform.

Opening up the e-commerce market led to a three-fold price rise. Only five out of ten pieces he collected were fresh fruits. But the true problem was yet to show up.

"Delivery is tough work but I am not afraid of it. I am just unwilling to take unfairness."

Half of his monthly profits of 6,000 yuan were spent on settling customer claims.

So he left a note on the website of the State Council, appealing for introduction of insurance in the delivery of fresh agricultural produce.

Premier Li responded by promising multiple measures to lower logistical costs in an effort to encourage development of new industries and business modes such as express delivery.

"By broadening channels, the government can listen to the voice of people and achieve social interaction," Li said.

"Premier Li Keqiang looks as amiable as he is on TV," Li Pengxuan said.

Premier Li Keqiang heard suggestions from representatives from all walks of life regarding the draft of government work report at a symposium on January 31.

The nine representatives, from education, technology, culture, health and sports as well as the grassroots, voiced their opinion for changes in their trades.