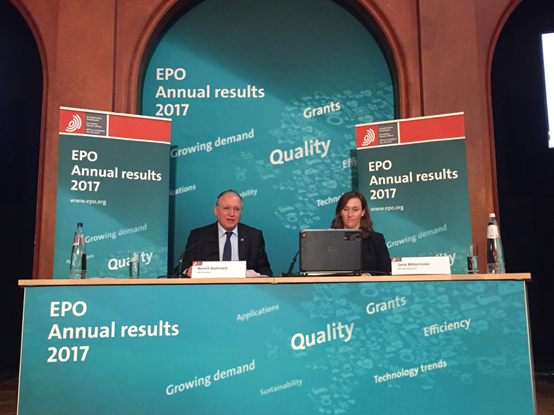 The EPO said it had received nearly 166,000 applications, up 3.9 percent from 2016, setting a new EPO record for annual filings.

"In terms of patents, 2017 was a positive year for Europe," said EPO President Benoit Battistelli. "The growing demand for European patents confirms Europe's attractiveness as a leading technology market."

There was strong growth again in applications from China, which broke into the top five countries for the first time, along with the US, Germany, Japan, and France.

Medical technology remained the field with the highest number of patent applications, followed by digital communication and computer technology.

Out the Top 10 fields, biotechnology registered the strongest growth with pharmaceuticals following close behind.

"The EPO has successfully responded to the sustained demand with efficiency measures that have increased production, productivity, and timeliness. At the same time we have enhanced the quality of our products and services," Battistelli said.

The list of applicants was made up of four European companies, Siemens, Royal Philips, Robert Bosch, and Ericsson, while three were from the US such as Qualcomm, United Technologies, and Intel. There were also two South Korean companies included on the list, LG, and Samsung.

The EPO is headquartered in Munich, Germany and represents 38 European countries.