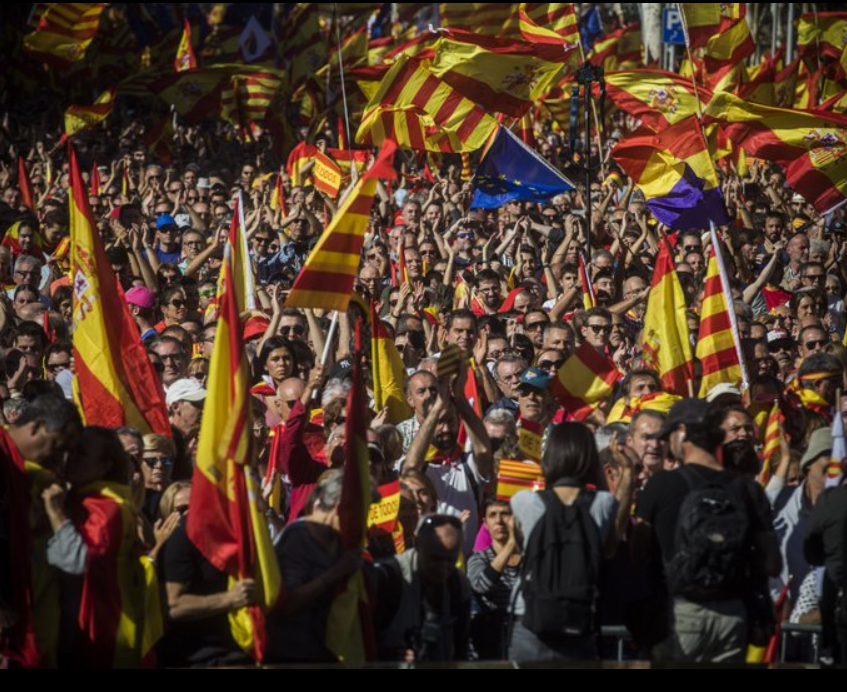 Hundreds of thousands of Catalans took to the streets of Barcelona on Sunday to voice their opposition to the region’s declaration of independence amid vast political uncertainty for the region in northeast Spain.

Catalonia’s political leadership was fired Saturday by central authorities in Madrid who are trying to tame the worst political crisis Spain has seen in decades. So far, Catalan’s former leader has insinuated that he won’t step down.

Waving Spanish, Catalan and European Union flags, the protesters described themselves as the silent majority who have been ignored during the wealthy region’s bid for independence, which came to a head Friday when the regional parliament voted to secede from Spain.

“We have organized ourselves late, but we are here to show that there is a majority of Catalans that are no longer silent and that no longer want to be silenced,” said Alex Ramos, head of Catalan Civil Society, a pro-union grassroots group.

The organizers said more than 1 million people turned out but police put the figure at 300,000. There was no way to immediately reconcile the figures.

The mood at Sunday’s rally was festive. “We won’t let Spain be torn apart into pieces,” read one banner. “The awakening of a silenced nation,” read another.

Monday will be the first working day since the region declared independence and its leadership was fired. It was not known how Catalonia’s estimated 200,000 public workers would react to their bosses’ dismissal.

Ousted regional leader Carles Puigdemont has called for Catalans to engage in peaceful opposition to Spain’s takeover of regional affairs, saying he and his fired cabinet would keep “working to build a free country.”

Separatist parties and grassroots groups have spoken of waging a campaign of disobedience to hamper the efforts by central authorities to run the region.

Puigdemont and his ministers could face prison for their separatist actions. Spain’s government has said the ousted Catalan leaders could be charged with usurping others’ functions if they refuse to comply with their firing. Spanish prosecutors have also said they may consider rebellion charges against leading separatists.

Oriol Junqueras, the ousted vice president of Catalonia’s rebellious government, wrote in an open letter Sunday saying that separatists should consider participating in the election Rajoy called for Dec. 21. Some secessionists have argued to boycott the vote.

The top politicians for pro-union parties hoped to use Sunday’s rally to launch their election campaigns.

“It’s time to take over the streets and take over the ballot boxes,” said Albert Rivera, the leader of the center-right Citizens party.

Separatists won 48 percent of the vote in Catalonia in the 2015 regional election, although they took more seats in the regional parliament because of an election law that gives more weight to sparsely populated areas.

Organizers said the rally’s goal Sunday was to defend Spain’s unity and reject “an unprecedented attack in the history of democracy.”  Three weeks ago, the same group organized another mass rally that brought hundreds of thousands onto Barcelona’s streets — the largest pro-union show of force in Catalonia in recent years.

“Catalan leaders have broken the law. The central government has let this situation go for too long, for even 30 or 40 years, thinking that we were never going to arrive at this extreme, but here we are,” said Angelita Cuesta, a 66-year-old retiree at the rally.

“Our society is fractured, there are family members and friends who no longer can talk about politics to avoid conflict,” she added.

The Catalan parliament’s vote to secede came after an Oct. 1 referendum in favor of independence that was deemed illegal by Spain’s constitutional court.

There are fears the political turmoil in Catalonia could have a severe economic impact, both in the region and on Spain itself.

Addressing the crowd at Sunday’s rally, Josep Borrell, former European Parliament president, said the central government’s move to take control of some regional affairs was the only thing preventing a full-blown economic crisis in Catalonia.

If the government had not triggered its constitutional powers to run Catalonia, “many of you would have lost your jobs” he said. “If that hasn’t happened, it’s because ... businesses and markets understand that there won’t be (secession).”

Some 1,700 companies have already relocated their headquarters to other parts of Spain in recent weeks amid the political turmoil.