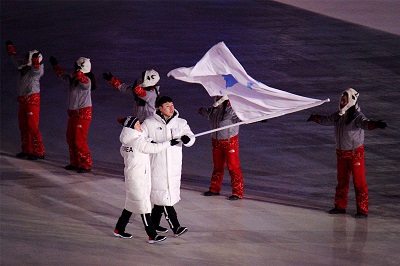 The invitation was delivered in a meeting between Moon and the North Korean leader's sister Kim Yo-jong, who is also a special envoy to Kim.

Moon said “necessary conditions” are needed for the inter-Korean summit.

"Let us make it happen by creating the necessary conditions in the future," he was quoted as saying by Yonhap News Agency. Moon added that North Korea should resume talks with the United States, an ally of the South.

Moon was seen shaking hands with Kim Yo-jong at the opening ceremony while standing a step lower to the North Korean.

Athletes from the two nations paraded together under a Korean Peninsula flag for the first time on Korean soil at the opening ceremony, which brought warm glows to a freezing night at the PyeongChang Olympic Stadium.

Though sporadic protests against a unified Korean team were seen in PyeongChang, the tune of 1988 Olympics song “Hand in Hand” and Korean folk “Arirang” at the ceremony moved Korean spectators who had to endure the biting cold in the stadium.

"It was with an ardent desire that the people of Korea aspired to host the Olympic Winter Games, as the dream and future of Korea, the only divided nation in the world, mirrors the Olympic spirit in its pursuit of peace," South Korean President Moon Jae-in said in his speech opening the Games.