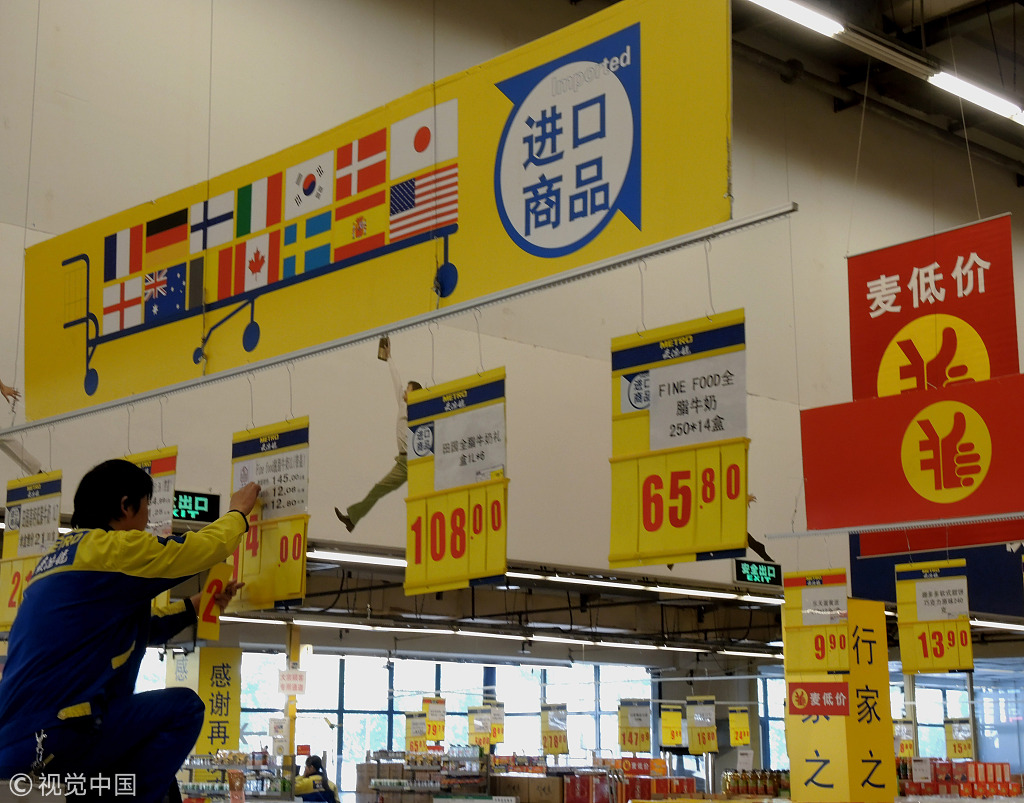 A staff is changing tags at a Metro Market in China. (Photo: VCG)

Lin Xiao enjoys time with her family shopping for seafood imported from all over the world at a nearby supermarket. Argentine red shrimp is endeared to her family that they’d bring a full bag home every time.

On the other side of the world, hustle farmers in Argentina are enjoying the dividends brought from  the Chinese market. Besides seafood, beef, wine and dairies have become increasingly in demand in China. “China is a major contributor to world economic growth as well as an important market for foreign trade,” said an official of the Argentine Agriculture Ministry. “China has adopted a series of measures to broaden imports, reflecting its firm stance to promote economic globalization and support liberal trade, and inject fresh vigor into world economic development,” added the official.

Policies have been continuously released and followed through to strengthen the country’s unprompted opening-up as the First China International Import Expo is under preparation, with import tariffs on certain items being reduced to satisfy domestic consumers’ demand.

Since early May, tariffs on 28 pharmaceuticals have been lifted. The gesture made most imported medicines, especially anti-cancer drugs, duty-free in China. Moreover, tariffs on items including cosmetics, coffee makers, intelligent toilet seats and diapers have been largely slashed.

“China’s recent gestures on cutting tariffs send the world a positive signal of the country’s commitment to increasing imports,” said Zhao Ping from the research department of the China Council for the Promotion of International Trade. “A package of policies aimed at broadening imports bestows large amounts of featured foreign products an opportunity to enter the Chinese market, which is conducive to better meeting people’s increasing requirements for a beautiful life.

“It has been way more convenient to buy imported goods nowadays compared to the past,” said Li Zhiyuan, a resident in Chaoyang District, Beijing at a supermarket that specializes in imported goods. Li’s parents take fish oil daily. Li had no option but turned to friends abroad to buy fish oil from other countries. Now, the deep-sea fish oil is not only available in imported stores but also on their online stores. What he needs to do is make the order online and the goods will be delivered.

The rational increase in imported foreign average consumer goods reflects quite a number of Chinese consumers’ expectations. Foreign products of greater variety, affordable prices and easier access will be available for most Chinese people in different cities in China.

“China has never aimed at pursuing a trade surplus, but increasing imports and maintaining its current account balance through a series of practical measures,” said an official of China’s Ministry of Commerce. Statistics from the Commerce Ministry show that as of today, as many as 15 free-trade agreements have been signed by China with 23 countries and regions, covering over 8,000 duty-free goods. In the next 15 years, China is estimated to import goods worth $24 trillion.

“China’s increase in imports serves the interests of the country in better adapting to the new changes in domestic demand, and opens a window to the world  to share the immense opportunities in the Chinese market,” said Huang Zhilong, head of the macroeconomic research center under the Suning Institute of Finance. “As the world’s second largest economy, China has great potential and promising prospects in the consumer market. The series of practical measures in increasing imports showcase the sense of responsibility as a great power, making China’s development achievements benefit the whole world,” said Huang.