In new walkouts, students look to turn outrage to action 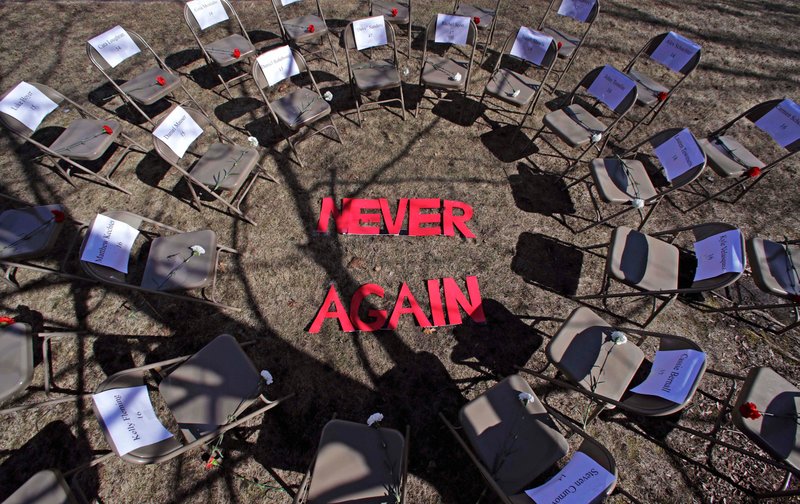 Once again, they filed out of class. In a new wave of school walkouts, they raised their voices against gun violence. But this time, they were looking to turn outrage into action.

Many of the students who joined demonstrations across the country Friday turned their attention to upcoming elections as they pressed for tougher gun laws and politicians who will enact them. Scores of rallies turned into voter registration drives. Students took the stage to issue an ultimatum to their lawmakers.

All told, tens of thousands of students left class Friday for protests that spread from coast to coast. They filed out at 10 a.m. to gather for a moment of silence honoring the victims of gun violence. Some headed to nearby rallies. Others stayed at school to discuss gun control and register their peers to vote.

Organizers said an estimated 150,000 students protested Friday at more than 2,700 walkouts, including at least one in each state, as they sought to sustain a wave of youth activism that drove a larger round of walkouts on March 14. Activists behind that earlier protest estimated it drew nearly 1 million students.

Friday’s action was planned by a Connecticut teenager, Lane Murdock, after a gunman stormed Marjory Stoneman Douglas High School in Parkland, Florida, on Feb. 14, leaving 17 people dead. It was meant to coincide with the 19th anniversary of the Columbine High School shooting in Littleton, Colorado.

The focus on the November elections reflects a shift after activists gained little immediate traction in Washington. And prospects for their influence remain uncertain. Congress has shown little inclination to tighten gun laws, and President Donald Trump backed away from his initial support for raising the minimum age to buy some guns.

Among those who helped orchestrate the walkout — and the voter registration push — was the progressive group Indivisible, which formed after the 2016 election to oppose Trump’s policies.

In cities across the country, it was common to see crowds of students clad in orange — the color used by hunters to signal “don’t shoot” — rallying outside their schools or at public parks.

Several hundred gathered at New York City’s Washington Square Park, chanting “The NRA has got to go!” and “Enough is enough.” A large group in Washington marched from the White House to the Capitol building to rally for gun control.

Nate Fenerty was among hundreds of students who left class to rally in Richmond, Virginia. He registered to vote for the first time at tables set up by students at the protest and said he wants Congress to approve mandatory background checks for gun buyers.

“How many more times are we going to stand in memoriam for another school shooting before our policymakers to actually do something?” said Fenerty, who carried a sign saying “Am I Next?”

Shortly before the walkouts, news spread that there had been another shooting at a Florida school. Authorities say one student shot another in the ankle at Forest High School in Ocala early Friday. A suspect was taken into custody. Activists said it underscored the urgency of their work.

Student David Hogg, a Parkland survivor who has emerged as a leading activist, took to social media nearly every day this week urging students to register. On Thursday he made the motivation clear on Twitter: “The only way to make politicians listen to us is by voting in ones that will,” he said.

Hogg was among about 50 students who walked out of Stoneman Douglas on Friday after administrators threatened protesters with unexcused absences.

Craig Smith and Terry McGary, both 17-year-old juniors, said they walked out because they want to show respect for the Columbine victims.

“It was a guilt trip to make us not walk out,” McGary said about the threat.

The walkouts drew counter-protesters in some areas, including about 30 at a rally outside New Hampshire’s statehouse. In Kansas, about 200 gun-rights supporters held their own demonstration outside the statehouse. Many carried signs and flags, and some brought holstered handguns.

Kansas Secretary of State Kris Kobach, a Republican candidate for governor, addressed the crowd and later criticized the walkout movement.

“Instead of walking out of class, why don’t you stay in class and spend that half hour studying the Second Amendment? You might learn something,” Kobach said later.

Some students in Colorado participated in the walkouts but not at Columbine, which has closed on April 20 ever since the 1999 shooting that left 15 people dead. Some Columbine students attended a vigil with Parkland survivors on Thursday night, but on Friday, their school called on them to attend a day of service.

Principal Scott Christy said in a letter to other schools in his district that April “has long been a time to respectfully remember our loss, and also support efforts to make our communities a better place.”