HEADLINE In second day of shutdown, Republicans, Democrats dig in for fight

In second day of shutdown, Republicans, Democrats dig in for fight 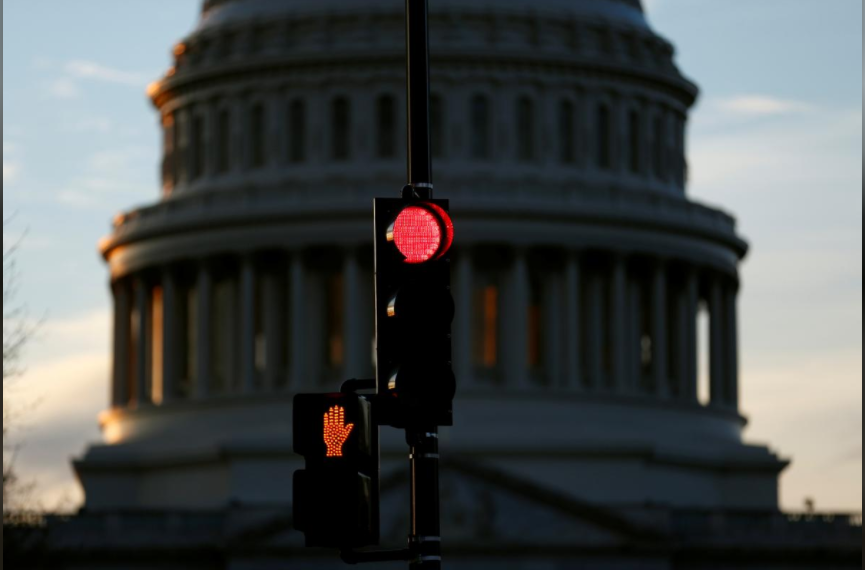 US President Donald Trump and the Congress failed to reach a deal on funding for federal agencies in Washington, DC, January 20, 2018. Photo: Reuters

Republicans and Democrats appeared to harden their positions on Sunday as both sides hunkered down for what could be a prolonged fight, with a U.S. government shutdown in its second day.

Democrats demanded that US President Donald Trump negotiate on immigration issues as part of any agreement to resume government funding and accused him of reneging on an earlier accord to protect “Dreamers,” illegal immigrants brought to the United States as children, from deportation.

“I hope it is just a matter of hours or days. But we need to have a substantive answer, and the only person who can lead us to that is President Trump. This is his shutdown,” Dick Durbin, the second ranking Democrat in the Senate, said on the CBS “Face the Nation” program.

Republicans were just as adamant, saying they would not negotiate immigration or other issues as long as all but essential government services remain shuttered.

Speaking to U.S. troops at a military base in the Middle East, Vice President Mike Pence said, “We’re not going to reopen negotiations on illegal immigration until they reopen the government and give you, our soldiers and your families, the benefits and wages you’ve earned.”

A bipartisan group of senators met on Sunday in a Senate office building, searching for ways out of the crisis.

Moderate Republican Senator Susan Collins said a group of as many as 22 senators were discussing alternatives, though the details were “in flux.” She added it would be up to Senate Republican and Democratic leaders “as to how to proceed.”

After funding for federal agencies ran out at midnight on Friday, many US government employees were told to stay home or in some cases work without pay until new funding is approved. The shutdown is the first since a 16-day closure in October 2013, with the effects being more visible on Monday, when government offices normally would reopen.

With elections set for November for a third of US Senate seats and the entire House of Representatives, both sides are maneuvering to blame the other for the shutdown.

Trump canceled a trip to his Mar-a-Lago estate in Florida that included a major fundraiser on the anniversary of his first year as president. The White House said his planned trip to the World Economic Forum in Davos, Switzerland, next week was in flux because of the standoff.

‘HOSTAGES RIPE FOR THE TAKING’

“I’m kind of keeping hope alive here that before 1 a.m. tomorrow morning that we’ll have something that gets us out of this jam,” Senator John Thune, a junior member of the Republican leadership, told reporters.

The Senate will vote at 1 am (EST) on Monday on whether to advance a measure to fund the government through February 8, unless Democrats agree to hold it sooner, McConnell said on Saturday.

The level of support for the bill was uncertain, but given Democratic leaders’ public statements, it seemed unlikely the measure would receive the 60 votes required to advance.

“To most Americans, those sound like fundamental responsibilities” of government, McConnell said. “To the Democratic leader, apparently they sound like hostages ripe for the taking.”

White House budget director Mick Mulvaney said Trump had instructed him to ease the effects of the shutdown as much as possible.

“The president has told me, make sure as many people go to work Monday as possibly can. Use every tool legally available to you,” Mulvaney said on “Face the Nation.”