India's government on Saturday approved the death penalty for child rapists, after the gang rape and murder of an eight-year-old girl and a series of other horrific sexual assaults caused nationwide outrage. 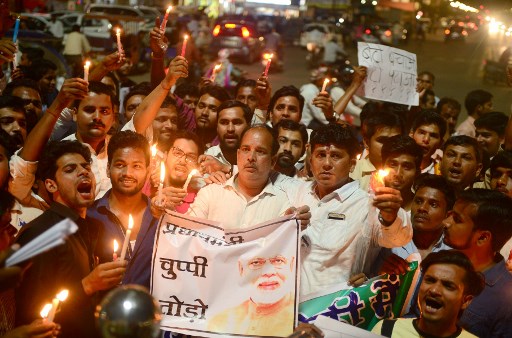 Indian Congress workers participate in a candle light procession as they shout slogans against Indian Prime Minister Narendra Modi during a protest against rape incidents, in Allahabad on April 13, 2018. Photo: AFP

Prime Minister Narendra Modi called a cabinet meeting to pass the measure Saturday on his return from the Commonwealth summit, a government official told AFP.

Protests have erupted across India in recent days over the rape and killing of the young Muslim girl by a group of Hindu men in Jammu and Kashmir state, increasing pressure on Modi to take action.

The attack sent out the sort of shockwaves that shook the country after the equally horrific gang rape of a Delhi student on a bus in 2012, which made headlines around the world.

The cabinet approved the ordinance amending laws on sexual violence to allow for capital punishment for those convicted of raping children below the age of 12, the official said. 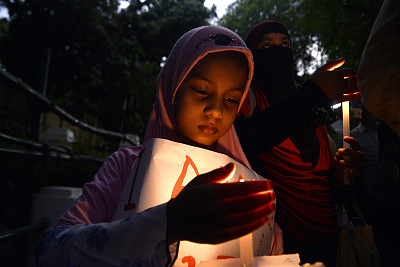 A girl holds the candle and poster along with other and takes part in the march against rape.

"The ordinance will be sent to the president for his consent," the official said on condition of anonymity. The president's approval is seen as a formality.

The new decree requires trials involving child victims to be completed in two months after an arrest, unusually speedy for India where the wheels of justice turn slowly.

The order will remain in effect for a period of six months from the president's approval, or until parliament votes the changes into law.

India has the death penalty for the most brutal murders and terror attacks. But the sentences are rarely carried out and are often struck down on appeal by higher courts.

India carried out its last hanging in 2015 of a 1993 Mumbai bombing convict. 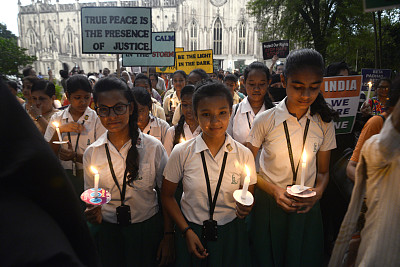 School girls hold the candle and poster during the march against rape. Photo: VCG

The recent protests began after police accused eight Hindu men of raping a Muslim girl in a bid to force her nomad community out of a Hindu-dominated area of Jammu and Kashmir.

Public anger boiled over after police last week made public how the girl was drugged, repeatedly raped while held captive for five days at a Hindu temple and then beaten to death.

The incident triggered weeks of street protests and global condemnation.

But sexual violence, including against children, remains unabated in India, with some 11,000 child rape cases reported in 2015.

A 2014 UN report said one in three rape victims in India was a minor.

On Saturday, police in central Madhya Pradesh state arrested a man over the rape and murder of a four-month-old girl.

The infant's blood soaked body was found on Friday in a building in Indore city hours after she went missing.

Police said the suspect was a distant relative of the victim and had targeted the child after an argument with her mother.

Activists say lax implementation of laws and snail-paced trials fuel the "rape culture" in India, with many accusing police of being slack in cases involving influential people.

Modi's government faced criticsm after one his party members in Uttar Pradesh was accused by a teenager of raping her.

The politician remained free for almost a year after police rejected pleas from the victim to file a rape case against the lawmaker.

He was finally arrested last week after the teenager tried to set herself on fire outside the residence of the state chief minister, triggering a wave of protests.