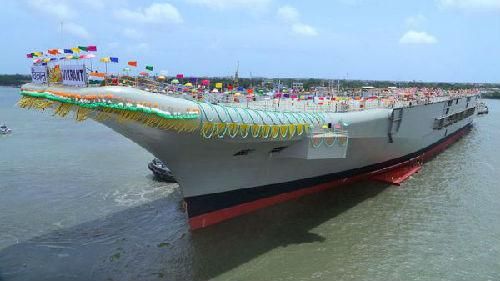 India's first indigenous aircraft carrier, INS Vikrant, is expected to be handed over to the navy by 2018 and commissioned by October 2020, a senior Indian official said Friday.

The ship will be put through harbor and sea trials before being commissioned, said Commodore J. Chowdhary, principal director of the Directorate of Naval Design of the Indian Navy, at a press briefing in New Delhi.

The INS Vikrant weighs 40,000 tons, 260 meters long, 60 meters wide and 30 meters deep minus the superstructure. It can carry 20 fighter jets and 10 other aircraft.

It was designed by the Directorate of Naval Design of the Indian Navy and built by the state-owned shipbuilder Cochin Shipyard Limited in the port city of Kochi, southwest India's Kerala state.

Construction of the ship has suffered repeated delays due to hold-ups in procurement, especially of 18 major equipment related to the aviation complex from Russia, including the arrestor and the withstanding gear.