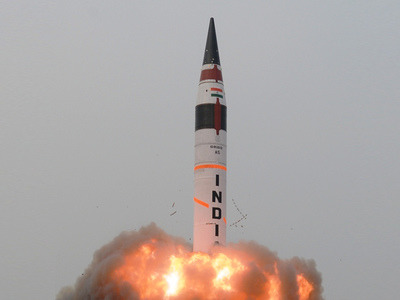 India on Thursday testfired intercontinental ballistic missile Agni-V, having a strike range of over 5,000 km, from off the Odisha coast in eastern India.
The missile testfiring is being dubbed as another step forward toward its eventual induction into the Strategic Forces Command (SFC). A few more user-trials are yet to be conducted before the 50-tonne missile is produced in adequate numbers for induction. The tri-Service SFC was established in 2003 to manage India's nuclear arsenal.
"We have successfully launched nuclear capable ballistic missile Agni-V today," media reports quoted Defence Minister Nirmala Sitharaman as saying.
Apart from the shorter-range missile "Prithvi" and "Dhanush," the SFC has already inducted the "Agni-I," "Agni-II" and "Agni-III" missiles in its arsenal.