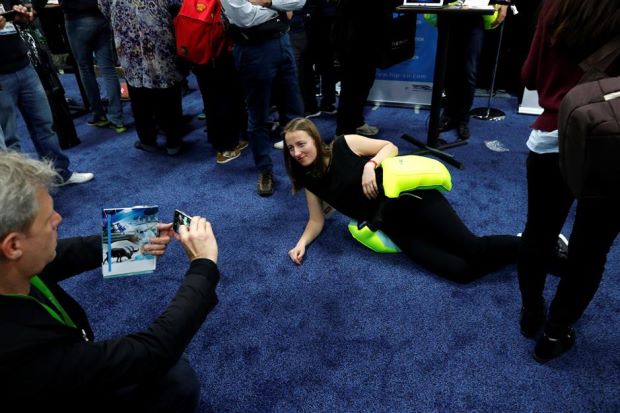 Beijing (People's Daily) - Injuries sustained from falls are a serious threat to the elderly.

World Health Organization officials said over 600,000 people worldwide have died as a result of falls, making it the second leading cause of death among the elderly demographic.

China has echoed similar concerns where 40 million Chinese over the age of 65 have been hospitalized for hip fractures sustained from falls.

And even worse are the long-term effects like brain injuries.

But good news has arrived in the form of an airbag manufactured by French company Helite.

The product looks like an overstuffed belt, with sensors built inside that can tell when sense when a person is about to fall, supposedly within less than a half a second.

Before a person falls, the "belt" inflates around the hip to absorb impact. The airbag device offers more protection than traditional safety methods.

There's also a new airbag available for those who don't know how to swim.

Ploota, made by a German startup, inflates when it senses the person wearing it is in trouble.

The inflatable lifesaver works fast enough to hold a person's head above water. And because of its small and lightweight qualities, it remains unnoticeable until its activated.

Another lifesaving airbag comes tucked inside a watch and can save those who suddenly pass out or slip underwater.

This timely device keeps a watchful eye on body movements and has a "saving mode" that can react quickly when needed.