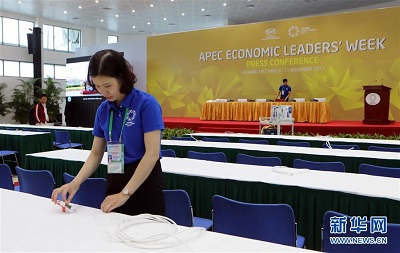 A stuff prepared for the opening of  The International Media Center for the Asia-Pacific Economic Cooperation (APEC) Economic Leaders' Week. Photo: Xinhua

The International Media Center for the Asia-Pacific Economic Cooperation (APEC) Economic Leaders' Week started to officially receive reporters in this central Vietnamese city on Sunday.The annual APEC gathering is slated for Nov.6-11 in Da Nang city, with leaders from the bloc's 21 economies expected to meet on Nov.10-11.The three-storey building, refurbished from Da Nang Fair and Exhibition Center, has a floor area of more than 13,000 square meters.The center has a reception hall and separate areas for holding press conferences, security checks, healthcare services, among others. It also consists of media booths for major news organizations from Vietnam and abroad.The key press conference room is a working venue for reporters, where Vietnamese President Tran Dai Quang will chair a press conference after the APEC Leaders' Week wraps up on Nov. 11.Some 3,000 reporters from Vietnam and around the world have registered to cover various events during the week.The international media center was launched on Oct. 28 by Vietnamese Deputy Prime Minister and Foreign Minister Pham Binh Minh."This is a good opportunity for Da Nang in particular and our country to promote the image of a beautiful, dynamic, prosperous Vietnam and a friendly and hospitable Da Nang city deserving the title of 'the most worth-living city in the country,'" Minh said at the launching ceremony.Apart from serving reporters, the center also showcases in various forms the socio-economic development of Vietnam.