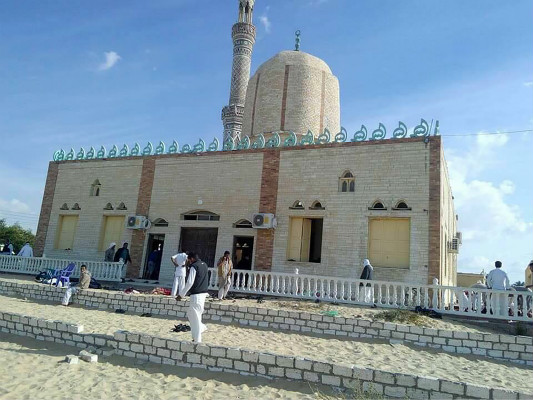 View of the Rawda mosque, roughly 40 kilometres west of the North Sinai capital of El-Arish, after a gun and bombing attack, on November 24. （Photo: VCG）

Various countries including the US, Russia, the UK, and France as well as international organizations have condemned the deadly terrorist attack in Egypt’s Sinai Peninsula that killed at least 235 people, calling for coordinated international efforts to confront terrorism in recent days.

The UN Security Council and Secretary-General António Guterres issued a statement on November 24, condemning the attack “in the strongest terms,” said a statement on the website of UN.

“The Secretary-General extends his deepest condolences to the families of the victims and to the Government and people of Egypt and wishes a swift recovery to those who have been injured,” said the statement.

“The Secretary-General calls for those responsible for today’s horrific attack to be swiftly brought to justice,” the statement noted.

Chinese President Xi Jinping on Saturday sent a message of condolences to his Egyptian counterpart Abdel Fattah al-Sisi.In the message, Xi offered his deep condolences to the victims and sincere sympathy to President Sisi, the families of the victims and the injured.China firmly opposes all forms of terrorism and strongly condemns the attack, Xi said.China is steadfast in supporting Egypt's efforts in fighting against terrorism and safeguarding its national security and stability, the message added.

The US President Donald Trump spoke with Egyptian President Abdel-Fattah El-Sisi by phone on November 24 to express his condolences for the terrorist attack, saying that “the US will continue to stand with Egypt in the face of terrorism,” Bloomberg reported, citing a White House readout of the call.

“The international community cannot tolerate barbaric terrorist groups and must strengthen its efforts to defeat terrorism and extremism in all its forms,” said the readout.

Moscow strongly condemns the major terrorist attack in Egypt and is prepared for stepping up anti-terrorist cooperation with Cairo, the Russian News Agency quoted Russian Foreign Ministry as saying on November 24.

"We strongly condemn the barbaric crime in Sinai, Egypt and reaffirm Russia’s high-principled rejection and condemnation of any terrorist attacks regardless of the motives of their ideological masterminds and perpetrators," the Foreign Ministry said. 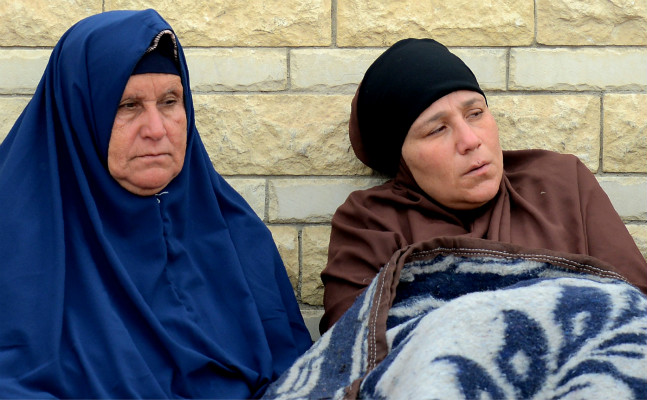 Relatives of the victims of the bomb and gun assault on the North Sinai Rawda mosque sit outside the Suez Canal University hospital in the eastern port city of Ismailia on November 25. (Photo: VCG)

"We are prepared for stepping up cooperation with Egypt and other responsible members of the international community in giving an effective rebuff to the terrorist threat," the report said, citing the Foreign Ministry.

The UK Foreign Minister Boris Johnson also condemned the “horrendous and sickening” attack, according to a statement on the website on UK government on November 24.

“My thoughts are with the people of Egypt and the families of all those affected by this terrible and cowardly act,” he said, underlining UK’s full commitment in standing with Egypt in its fight against terrorism.

Johnson’s French counterpart, Jean-Yves Le Drian, also expressed his condolences to the families of victims of the “despicable attack” on November 24, according to an AFP report.

Ahmed Aboul Gheit, head of the Arab League, which is based in Cairo, condemned the “terrifying crime which again shows that Islam is innocent of those who follow extremist terrorist ideology”, his spokesman said in a statement on November 24, the AFP reported. 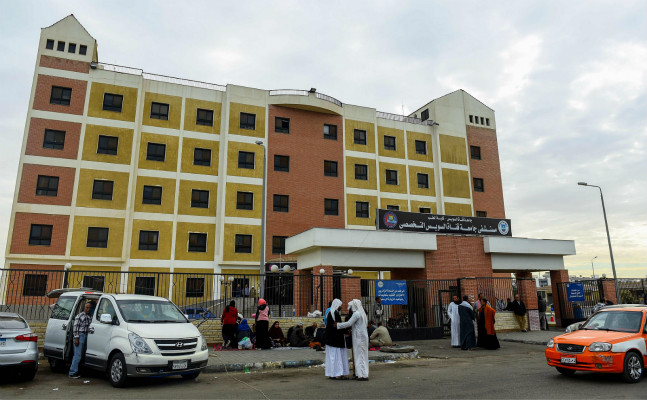 Relatives of the victims of the bomb and gun assault on the North Sinai Rawda mosque wait outside the Suez Canal University hospital in the eastern port city of Ismailia on November 25. (Photo: VCG)

Indian Prime Minister Narendra Modi also condemned the terror attack on November 24, stressing that India “resolutely supports” the fights against all forms of terrorism and stands with the people and the Egyptian government.

"Strongly condemn the barbaric terrorist attack on a place of worship in Egypt. Our deep condolences at the loss of innocent lives," Modi tweeted Friday night.

Iranian Foreign Minister Mohammad Javad Zarif on Saturday strongly condemned the deadly terrorist attack in Egypt."Once again the cowardly hand of terrorism targeted the dear nation of Egypt," Zarif tweeted."It does not differentiate between places even if they are mosques and place of worship," he said.

"I strongly condemn this heinous act of terrorism and ask God to give his blessing to the martyrs of the incident and bring quick recovery to the wounded," he added.

Earlier on Friday, gunmen broke into a mosque west of the city of Arish in the north of Egypt's Sinai Peninsula, set off an explosive device and shot those running out. So far, the attack has killed 305 people , Egypt's chief prosecutor said in a statement on Saturday.