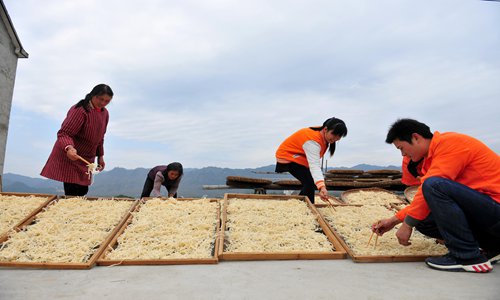 In the small village of Xieqiao in East China's Jiangsu Province, most of the corn and wheat grown on the farmlands there does not get put on people's dining tables, rather it goes toward making bunches of "dried flowers."
Zhang Zhan, 67, was the first villager in Xieqiao to make dried flowers. "They all believed I was crazy and some even took me as a liar," he said, recalling how he eventually persuaded his fellow villagers to join him in making the flowers over 10 years ago.
Zhang spotted the business opportunity 20 years ago when selling fresh flowers in Beijing.
"I found that almost all the dried flowers were imported and sold at a high price," he said.
He started to learn a new flower technique, through discovering that wheat, corn bran, branches and wild grass could be used to make exquisite dried flowers.
"After bleaching, dyeing and drying in the sun, the corn bran can be made into roses, lilies and lotus flowers," he said.
He then went back to his hometown to become a farmer and run his own rural dried flower workshop.
Online wonder

Now he owns over 20 online stores with a combined annual sales volume of 60 million yuan, creating more than 300 jobs for residents of his village.
Zhang's flowers have even been sold to Japan, the Netherlands and the US.
More and more farmers in Xieqiao have started to make dried flowers. And a number of university students, veterans and migrant workers from the small village have even returned home to try out the business idea.
Currently, over 90 percent of the 3,000 villagers living Xieqiao are making and selling dried flowers. They now run more than 630 online stores, boasting annual sales valuing over 260 million yuan.
Poverty alleviation
China's "No.1 Central Document" for this year, published Sunday, focuses on agriculture, farmers and rural areas. It sets specific tasks for the country's rural vitalization strategy, including achieving higher-quality agricultural development and ensuring the quality of poverty reduction.
In recent years, the Chinese government has pushed the integration of the internet and agriculture in order to improve farmers' lives.
Flower grower Zhang Yan of Shuyang county, Jiangsu Province began selling flowers online in 2007. In 2016, he began promoting his products through live-streams.
"At the beginning, there were only hundreds in the [virtual] audience, but now, I have over 30,000 fans, and each live-stream attracts around 40,000 spectators," he said, adding that the live-streams have helped boost his daily sales from about 3,000 yuan to 7,000 yuan in peak seasons.
Some 33,333 hectares of land in the Shuyang county is planted with over 3,000 kinds of flowers and its annual online flower sales volume is over 9 billion yuan.
According to a report by Chinese e-commerce giant Alibaba Group Holding, there are 2,118 "Taobao villages" in China, which refers to villages where over 10 percent of households are involved in online selling on Taobao with total annual transactions valuing more than 10 million yuan.
It is expected that the number of Taobao villages will exceed 5,500 by 2020, bringing more than 3 million jobs to rural areas.
"The internet is empowering farmers and turning them into new kinds of farmers," Zhang Zhan said.