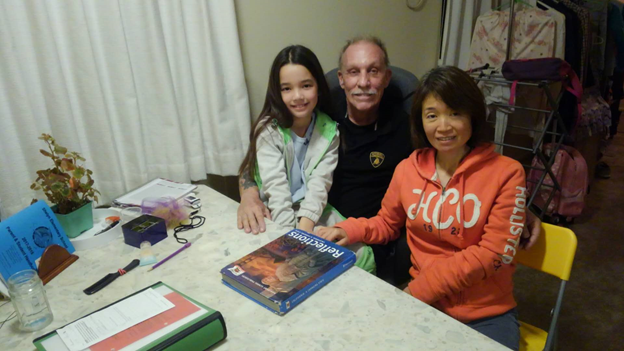 Los Angeles (People’s Daily) – A traditional Chinese proverb says, “A great ocean can accommodate a hundred rivers, and a great man a thousand views.” A bond can be a boon and a blessing, it can also be a burden in disguise.

For couples of different cultures, marriage is an adventure, a step into the unknown. For their offspring, the implications can be real.

According to a Pew Research, intermarriage rates have been rising steadily since 1967. Nearly three-in-ten Asians were married to someone of a different background or race, in 2015.

The Hurleys: An enriching experience

The Hurleys are an ordinary family. Michele Hurley, 9, is a Math buff at school and, in China, a celebrity for friends and family.

Michele has fair skin, said her father, Steve Hurley, a retired teacher and information systems engineer. The once terminally ill father is euphoric. “When she starts speaking Chinese, people are very surprised,” he said from behind fond, floating eyes.

Steve and his Chinese wife Gina are a friendly couple, and they share an out-and-out fascination with Michele.

“I try to tell my daughter: You have to be culturally sensitive,” said Steve.

Despite the family’s cultural sensitivity, life has not been a bed of roses. The parent’s delicate health along with the fact they come from different backgrounds made the voyage a bit daunting.

After a lot of acceptance and patience, the challenge became a practice for both parents, and an anticipated experience.

Gina’s Chinese name is Qing Liu. She and Steve travelled to China when Michele was two months old.

Gina returned to the US shortly thereafter due to health concerns, and Steve remained in Kun Ming with Michele and Gina’s family a few years.

Now they live in Hacienda Heights, California, and a good deal of their health concerns have since abated.

Gina is fond of her Chinese culture, as are Steve and Michele. Steve treasures the Chinese customs, “All the Moon Festival, the Spring Festival… it enriches your life!”

“There is so much to learn,” said Steve.

Sometimes, there’s not much communication, admits Steve, “but that’s when you get back to the family meeting.” Steve would embrace a mixed-marriage for Michele one day, given the right ingredients.

Gina and Steve are proud of their Chinese-American heritage, and just as proud of enchanting Michele. 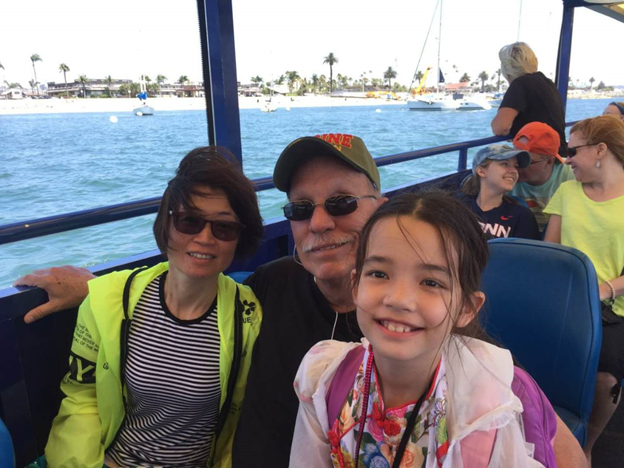 The Hurleys on a boat trip. Photo: courtesy of Steve and Gina Hurley

The Yangs: A cheerful bunch

Rene Yang is a renowned accountant and a pillar of his community, who’s been married for 41 years. He said his crown achievements are his marriage to his American wife, and his 3 daughters.

The 3 daughters are in their thirties. One is married to a Caucasian, another to a Chinese Korean, and still another to a Korean-Caucasian. They are happily married with children of their own.

Steve reminisced about the past, “We were in school together. “My wife and I were the type you might call adventuresome, so we had no problem venturing into unknowns,” he added, with a smile.

It wasn’t always this happy, he admitted talking about his relationship with his father-in-law, the first few years they were married.

Commenting on his father-in-law’s worries about how a foreign student might be able to “provide” for his family, Rene said, “My wife is the only one of his children who never went back to ask for money.”

Yet, Rene went into the marriage confident and unreserved, and with time, the relationship improved. “I see more benefit than hindrance,” Rene insisted, speaking of the adversities and advantages of intermarriage.

Gazing at his granddaughter, he said, “We’re fortunate that we have a common culture we call the Church Culture.” “It helps break down barriers,” he added.

Rene credits the ease with which his children were able to navigate the waters of their interracial relationships to the fact that he and his wife lived in Hawaii for thirty years, a laidback and diverse society which helped acquaint his daughters with heterogeneity.

Rene has candid words for anyone considering a mixed-marriage. Acceptance and respect, he said. “If there’s any disagreements we blame on the culture differences, then we just say—okay, that’s your culture!”

In his book, “The Prophet,” Khalil Gibran writes, “And think not you can direct the course of love, for love, if it finds you worthy, directs your course.” The Yangs and the Hurleys have the gift of “accommodation.” Their journeys, though human and imperfect, echo the Chinese proverb indeed.

“See the good in everyone and you will be a slave to no one.” Proverb or quote?