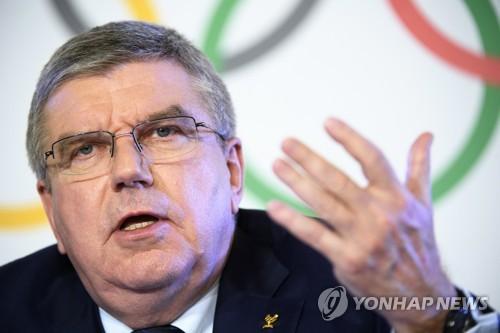 International Olympic Committee President Thomas Bach met with Kim Jong Un in Pyongyang on Friday and said the North Korean leader is committed to having his country participate in the 2020 Tokyo Summer Olympics and the Beijing Winter Games in 2022.

Bach told an Associated Press Television crew that the two had a 30-minute formal meeting followed by 45 minutes of casual discussions while watching a football match Friday afternoon at Pyongyang's May Day Stadium.

He called the talks productive and said Kim expressed his appreciation for the IOC's role in helping North Korea compete at the Pyeongchang Winter Olympics in South Korea last month.

"We had a very fruitful meeting where it became clear that the supreme leader has a clear vision of the role that sport can play in a society with regard to education, with regard to health," Bach said. He added that Kim told him the North's participation in the Pyeongchang games and marching together with South Korean athletes were an "important contribution to a peaceful dialogue."

North Korea's official Korean Central News Agency published a report on the meeting on Saturday, saying that Bach expressed his "heartfelt thanks" to Kim over the North's participation in the Pyeongchang Games that made the event "symbolic of peace."

In response, Kim told Bach he was "very thankful" that the IOC took special measures to allow for North Korean athletes to compete in South Korea. He called for further cooperation with the IOC in developing winter sports and other sports activities in North Korea, the agency said.

Bach arrived in Pyongyang on Thursday to discuss development of sports in North Korea and the preparation of its athletes to qualify and participate in upcoming Olympics. He is the first foreign official to meet Kim since the North Korean leader returned earlier this week from a summit in Beijing with Chinese President Xi Jinping.

That was Kim's first known trip abroad since he assumed power after the death of his father in late 2011. Kim is to meet with South Korean President Moon Jae-in on April 27.

Bach, who also met with North Korea's sports minister, said he received a commitment from the county's National Olympic Committee to participate in Tokyo in 2020 and Beijing in 2022, along with competing in the respective youth Olympic Games.

"This commitment has been fully supported by the supreme leader Kim Jong Un in a meeting we had this afternoon," he said. "He explained that sport is a pillar in his policy for the future development of the Democratic People's Republic of Korea."

Both the North and South hailed the Pyeongchang Games as a significant step toward easing tensions on the Korean Peninsula that reached dangerously high levels last year as the North stepped up its missile tests and detonated its largest nuclear device to date.

Since the Olympics, the North has pushed forward with a flurry of diplomatic moves. After his summit with Moon, Kim is to meet President Donald Trump by May, though the date and location of that summit have not been announced. Japanese Prime Minister Shinzo Abe has said he is exploring the possibility of a meeting with Kim as well.