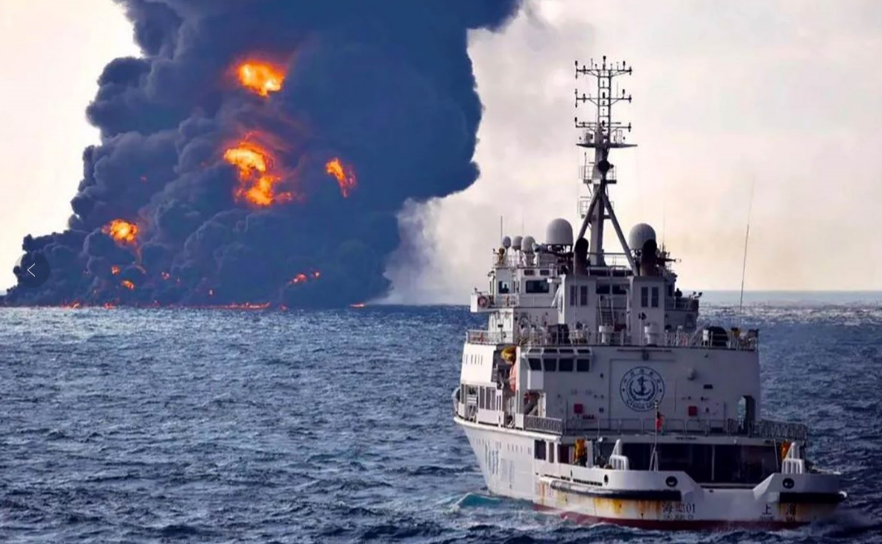 Smoke and flames rise from the burning Iranian oil tanker Sanchi off the coast of eastern China on January 14, 2018. Photo: AFP

Islamabad (People’s Daily) - Official reports have confirmed the Iranian oil tanker that burst into flames after colliding with a Chinese freight ship in China’s East Sea on January 6 has sunk.

“The terrible, tragic incident of fire in our country's oil tanker off the eastern coast of China, which resulted in the martyrdom-like death of its entire crew and hard-working personnel, caused great grief and sorrow for the people of Iran,” said Iranian President Hassan Rouhani in a nationally televised address.

National Iranian Tanker Company (NITC) owned the Sanchi, the vessel that burst into flames, and remained burning throughout the week. The company reported no survivors.

Chinese freighter CF-Crystal was transporting wheat when the collision occurred, and all of 21 of its crewmembers survived.

IRNA, the official news agency of Iran, reported the fate of the crewmembers on board the oil tanker and said the vessel had been sealed before it sunk.

Rouhani called on relevant agencies to investigate the collision and to take any legal action deemed necessary, IRNA reported on Sunday.

“I, hereby, offer my sincerest condolences to the great nation of Iran, especially their bereaved families with all my heart, and pray to the Almighty for the highest places for those who were the pioneers of the country's economy and innocently lost their lives on the path to working for national authority, and ask the Almighty patience and health for their families,” Rhouani said.

The Iranian president stressed the importance of identifying the deceased, and to help ease the suffering of those families who lost loved ones from the collision.

Press TV, an affiliate of the Islamic Republic of Iran Broadcasting network, reported that Chinese search and rescue teams had recovered two bodies on Saturday, along with the tanker’s “black box” recorder.

A body found earlier in the week was believed to be one of the 32 fallen crewmembers that consisted of 30 Iranians and two Bangladeshis.

Chinese salvage teams tried to reach the oil tanker’s living quarters but were kept out due to the fire and back-to-back explosions.

An investigation into the collision exploring the reasons that caused the accident are inevitable.

Iranian Special Task Force spokesperson Mohammad Rastad said on Saturday there was no hope of finding any surviving crewmembers.

"Catastrophic incidents involving tankers and large vessels have been so frequent in the past years that they no longer surprise maritime experts,” said the Press TV report and referenced similar incidents in the US and Europe.

The report went on to mention that despite advances in navigation technology, human error and the limited maneuverability of cargo ships leave plenty of room for accidents.

Even military vessels equipped with anti-collision radar systems more advanced than their commercial peers are not immune to error.

Last year, the US Navy was involved in a handful of deadly maritime accidents in the Asia Pacific region ending in the loss of life, a rash of inspections, and subsequent terminations of several high ranking officers.

“It is not all bad news for the shipping industry as data from insurance firm Allianz suggests that total losses of large ships recorded in 2016 saw a 16 percent decrease involving 85 incidents, with only one lost as a result of collision,” said the report.