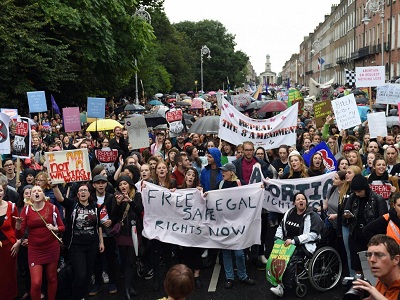 Ireland's voters will decide in late May on whether to lift a constitutional ban on most abortions, Prime Minister Leo Varadkar said Monday.

Varadkar spoke after a special meeting of the Cabinet to agree on details of a referendum on the eighth amendment to Ireland's constitution.

Varadkar says voters will be asked whether they want to retain the amendment, or repeal it and hand responsibility for legislating on abortion to parliament.

The 1983 amendment commits authorities to defend equally the right to life of a mother and an unborn child, giving this largely Roman Catholic nation the strictest abortion restrictions in Europe. Abortion is legal only in rare cases when a woman's life is in danger.

Varadkar, who leads the center-right Fine Gael party, said he will campaign to ease the abortion ban. He said the government would prepare draft legislation allowing for unrestricted abortion up to 12 weeks of pregnancy. It will only be introduced in parliament if the eighth amendment is repealed.

"For my part I will advocate a yes vote," said Varadkar, who has previously described himself as pro-life. "My own views have evolved over time. Life experience does that."

Varadkar said he realized that "this will be a difficult decision for the Irish people to make."

"It is a matter for people to make their own decision based on the evidence they hear, compassion and empathy and I want the debate to be respectful on all sides and it should never be personalized," he said.