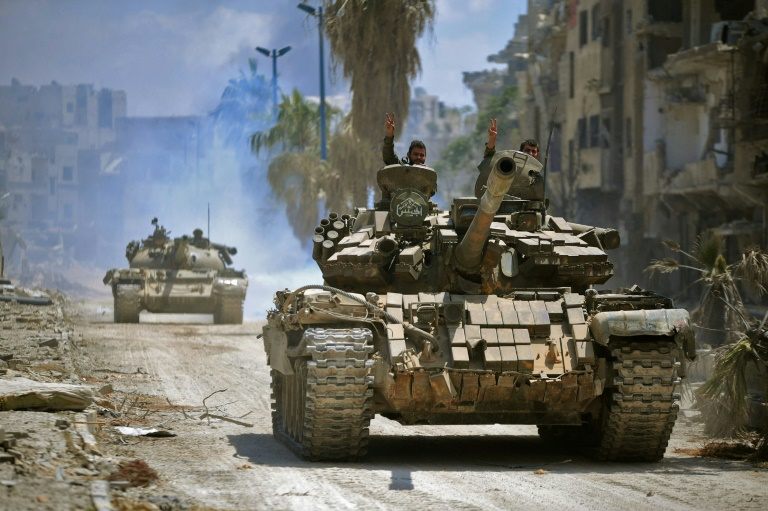 Islamic State group fighters began evacuating their final stronghold in southern Damascus on Sunday, a monitor said, bringing Syria's government closer than ever to flushing out the last threat to the capital.

Syrian President Bashar al-Assad has used a combination of military pressure and evacuation deals in recent months to recapture territory around the capital from his armed opponents.

Last month, troops and allied Palestinian militia launched a fierce offensive to oust IS from a cluster of districts in southern Damascus, including the Palestinian camp of Yarmuk.

After weeks of combat and heavy casualties, an apparent deal was reached for remaining IS fighters to leave Yarmuk and the adjacent district of Tadamun, according to the Syrian Observatory for Human Rights.

IS jihadists burned their headquarters in Yarmuk before boarding buses with their relatives to leave the area, said Observatory head Rami Abdel Rahman.

"The six buses left at dawn, heading east for the Syrian desert," he told AFP.

Abdel Rahman could not specify how many had left, but said a majority were relatives of jihadists and not armed. More than two dozen buses remained in Yarmuk for additional evacuations, he said.

Syrian state media and a Palestinian official have denied a deal was reached or that evacuations were taking place.

IS has had a presence in southern Damascus since 2015, expanding in recent years from Yarmuk to Tadamun and the nearby districts of Hajar al-Aswad and Qadam.

Yarmuk in particular has been devastated by Syria's conflict, suffering a crippling government siege since 2012 and ruined by years of fighting.

It was once home to 160,000 Palestinian refugees, as well as Syrians, but just a few hundred remain.

Assad has already ousted tens of thousands of rebels and civilians from areas around Damascus this year through military force and negotiated withdrawals, including the rebel bastion of Eastern Ghouta.

The regime used similar tactics to clear opposition towns northeast and south of Damascus earlier this month, leaving IS as the only armed presence in the capital.

The assault against the jihadist force has left more than 250 pro-regime forces, 233 jihadists and more than 60 civilians dead according to the Britain-based Observatory.

But the offensive died down around midday Saturday after a truce between IS on one side and pro-government Palestinian militias and regime ally Russia on the other, said the monitor, which relies on a network of sources in Syria.

"After the ceasefire on Saturday, IS withdrew from areas in the western part of Yarmuk camp, east towards the centre of the camp," Abdel Rahman said.

Syrian state media on Sunday denied evacuations were taking place in Hajar al-Aswad and made no mention of any departures from Yarmuk or Tadamun.

"Army units in southern Damascus continued their operations against the remaining terrorists in a small area of Hajar al-Aswad, making further progress towards ending the terrorist presence in the area," it said.

Anwar Abdel Hadi, the head of the Palestinian Liberation Organisation (PLO) also denied the evacuations but said IS appeared to be giving up.

"Daesh is surrendering in Yarmuk, Hajar al-Aswad, and Tadamun," he told AFP, using the Arabic acronym for IS.

It remains unclear exactly where Sunday's evacuees will go, or if they will be pursued by regime troops.

A similar deal reached last year by Syria's regime and its Lebanese ally Hezbollah saw IS fighters bussed out of the Lebanon-Syria border area towards Syria's east.

IS once held large parts of Syria's north and east, but offensives by rival forces have whittled down its control to less than three percent of the country.

The jihadists still hold some territory in remote parts of central Homs province and Deir Ezzor in the east, according to the Observatory.

But IS is even under attack there.

The Syrian Democratic Forces, an alliance of Arab and Kurdish fighters backed by Western powers, launched an assault on IS holdouts in Deir Ezzor earlier this month.

On Sunday, they were closing in on a key IS-held village, backed by close US and French ground support, the Observatory said.

"There are intense clashes around Hajjin, and the SDF is advancing thanks to American and French artillery fire," Abdel Rahman told AFP.

The SDF has already driven IS out of large parts of northern and eastern Syria, including the onetime jihadist capital of Raqa, with help from the coalition's air strikes, weapons and special forces advisors.