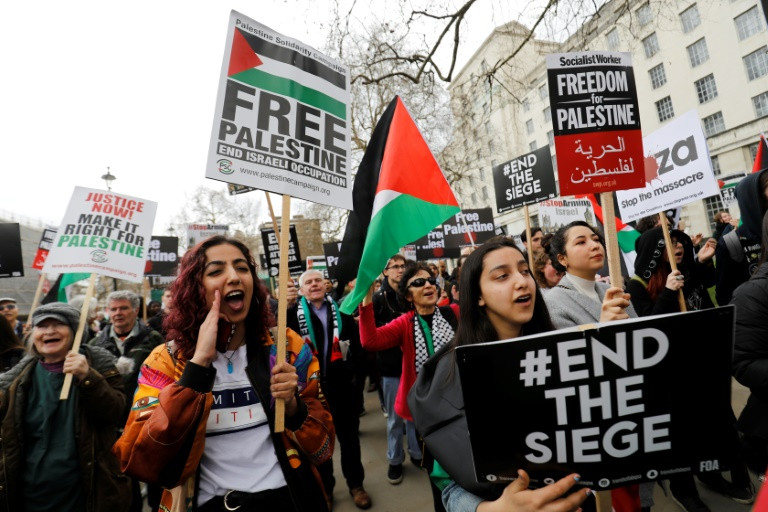 Video that appears to show a shooter firing across the Israel-Gaza border at unarmed Palestinians emerged amid international scrutiny on Israel over the killing of 31 Palestinians in protests along the border since March 30 (Photo: AFP)

Israel's army said Monday it was investigating a video appearing to be of troops cheering as a sniper shoots an unarmed Palestinian on the Gaza border after the footage went viral online.

The video emerged as attention is focused on Israel over the killing of 31 Palestinians in protests along the border with the Gaza Strip since March 30.

The army said the video seemed to show an incident that happened "a number of months ago" and pledged that it "will be thoroughly investigated".

The footage -- apparently filmed from the Israeli side of the border fence through binoculars or a telescopic site -- was shared widely online and by the media after it appeared first on Channel 10 television.

In the footage voices can be heard discussing opening fire on what seems to be unarmed Palestinians walking around on the other side of the frontier.

A shooter then appears to open fire on one of the figures knocking the person to the floor.

"Wow. What a video! Yes! That son of a bitch," one of the voices behind the camera exclaims in Hebrew.

It was not possible to verify the contents of the video independently or its origin.

Israel is already under the spotlight over the fatal shooting of 31 Palestinians and wounding of hundreds more in a spate of border protests along the edge of Gaza over the past 10 days.

Israel says it has only opened fire when necessary to stop damage to the border fence, infiltrations and attempted attacks.

The authorities have rebuffed international calls for an investigation into the killings, and Prime Minister Benjamin Netanyahu on Monday warned that his country would "hurt" anyone trying to attack it.