Israel says it will expand response if Gaza clashes go on 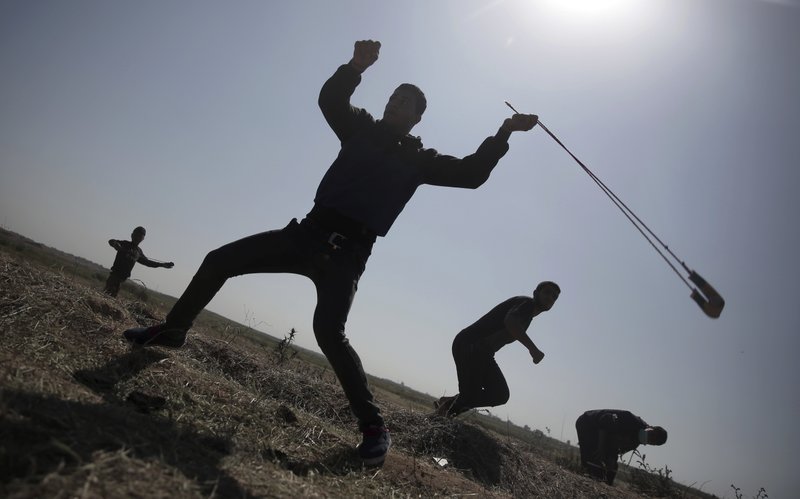 Israel will target militant groups inside Gaza if violence along the territory’s border with Israel drags on, the chief military spokesman warned on Saturday, a day after thousands of Palestinians staged protests near the border fence.

Friday’s mass marches were largely led by Gaza’s ruling Hamas group and touted as the launch of a six-week-long protest campaign against a stifling decade-old blockade of the territory.

Protests are to culminate in a large border march on May 15, the 70th anniversary of Israel founding. The date is mourned by Palestinians as their “nakba,“or catastrophe, when hundreds of thousands were uprooted in the 1948 Mideast war over Israel’s creation.

Palestinian health officials said 15 Palestinians were killed by Israeli fire and more than 750 hit by live rounds Friday, making it the bloodiest day in Gaza since the 2014 cross-border war between Israel and Hamas.

It appears unlikely protests will continue at such a scale, with larger turnouts expected after Friday noon prayers, the highlight of the Muslim religious week.

Organizers set up five tent encampments, each several hundred meters from the border to serve as launch points for protest.

Small crowds approached the fence at several locations Saturday, including east of Gaza City. Some young men broke away, throwing stones at Israeli soldiers on the other side of the fence, drawing live rounds and tear gas.

In two separate incidents, an Associated Press reporter saw two men who walked close to the fence get shot in the legs by soldiers.

In Friday’s confrontations, large crowds had gathered near the fence, with smaller groups of protesters rushing forward, throwing stones and burning tires.

Israeli troops responded with live fire and rubber-coated steel pellets, while drones dropped tear gas from above. Soldiers with rifles were perched on high earthen embankments overlooking the scene.

Israel’s military initially claimed Friday that “thousands of Palestinians are rioting in six locations throughout the Gaza Strip, rolling burning tires and hurling stones.” Video released by the army did not back such a description.

On Saturday, the chief army spokesman, Brig. Gen. Ronen Manelis, said that while thousands of Palestinians approached the border Friday, those engaged in stone-throwing were in the hundreds.

Manelis denied soldiers used excessive force, saying those killed by Israeli troops were men between the ages of 18 and 30 who were involved in violence and belonged to militant factions.

He alleged Gaza health officials exaggerated the number of wounded, and that several dozen at most were injured by live fire, with others suffering from tear gas inhalation or other types of injuries.

Manelis said soldiers knew who they were shooting at and how many people were hit by live fire.

The Gaza Health Ministry did not provide names and ages of those killed.

Four of the 15 dead were members of the Hamas military wing, the group said Saturday. The group said a fifth member who was not on the Health Ministry list was killed near the border, and that Israel has the body. It said another man is also missing in the border area.

Gaza City’s Shifa Hospital received 284 injured people Friday, the majority with bullet injuries, said spokesman Ayman Sahbani. He said 70 were under the age of 18 and 11 were women.

He said 40 surgeries were performed Friday and that 50 were planned Saturday. “These are all from live bullets that broke limbs or caused deep, open wounds with damage to nerves and veins,” he said.

Among those recovering from surgery was 16-year-old Marwan Yassin who said he had thrown stones with a slingshot at the fence Friday and was shot in both legs. One leg was wrapped in bandages and the other had a cast and metal fixtures.

Yassin said he would not return to the border because of the risks. His mother said at his bedside that she would forbid him from participating in future protests.

Protest organizers have said mass marches would continue until the day of the “nakba,” an anniversary with particular resonance in Gaza where the vast majority of 2 million residents are descendants of refugees. The day, May 15, will this year also coincide with the start of the Muslim holy month of Ramadan.

Manelis reiterated Saturday that Israel “will not allow a massive breach of the fence into Israeli territory.”

He said that Hamas and other Gaza militant groups are using protests as a cover for staging attacks. If violence continues, “we will not be able to continue limiting our activity to the fence area and will act against these terror organizations in other places too,” he said.

The border protests were seen as a new attempt by Hamas to break the border blockade, imposed by Israel and Egypt after the Islamic militant group seized Gaza from forces loyal to its rival, Palestinian President Mahmoud Abbas, in 2007. The continued closure has made it increasingly difficult for Hamas to govern.

The large turnout of marchers in the dangerous border zone also seemed to signal desperation among Gaza residents.

Life in the coastal strip has deteriorated further in recent months, with rising unemployment, grinding poverty and daily blackouts that last for hours.

The prospect of more protests and Palestinian casualties in coming weeks could also place Israel on the defensive.

At the United Nations, Secretary-General Antonio Guterres called for an independent investigation, while Security Council members urged restraint on both sides. The council didn’t decide on any action or joint message after an emergency meeting Friday evening.

Abbas, the West Bank-based leader, renewed a call for international protection of Palestinians.

In the West Bank, shopkeepers observed a commercial strike called by political activists Saturday to protest Israel’s response to the Gaza marches.