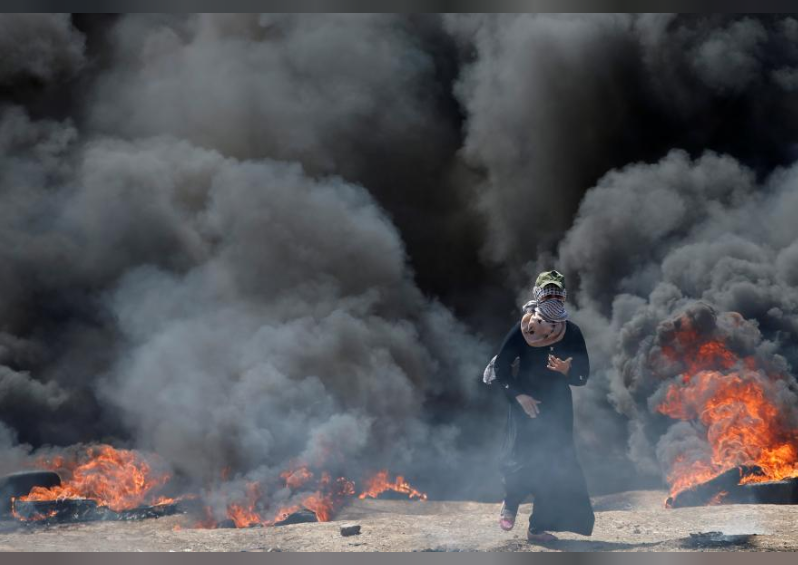 Israeli troops killed dozens of Palestinians taking part in mass protests on the Gaza border on Monday as the United States opened its embassy to Israel in Jerusalem.

The US relocation of its embassy from Tel Aviv fulfilled a pledge by US President Donald Trump, who has recognized the holy city as the Israeli capital, but it has fired Palestinian anger and drawn criticism from many foreign governments as a setback to peace efforts.

At the embassy inauguration ceremony, Israeli Prime Minister Benjamin Netanyahu thanked Trump for “having the courage to keep your promises”.

“What a glorious day for Israel,” Netanyahu said in a speech. “We are in Jerusalem and we are here to stay.”

Trump, in a recorded message, said he remained committed to peace between Israel and the Palestinians. He was represented at the ceremony by his daughter Ivanka and his son-in-law Jared Kushner, US envoy to the Middle East.

Kushner said it was possible for both sides in the Israeli-Palestinian conflict to gain more than give in any peace deal.

“Jerusalem must remain a city that brings people of all faiths together,” he said in a speech.

As the ceremony took place in Jerusalem, Palestinian protests on the Gaza border quickly turned into bloodshed

Israeli gunfire killed at least 43 Palestinians, the highest toll in a single day since a series of protests demanding the right to return to ancestral homes in Israel began on March 30.

The Palestinian Health Ministry said the dead included six children under the age of 18. Ministry officials said about 2,200 Palestinians were wounded, half of them by live bullets.

France and Britain called on Israel to show restraint and U.N. Secretary-General Antonio Guterres said he was “deeply concerned” by the events in Gaza.

Other responses to the violence were stronger. Regional power Turkey accused Israeli security forces of carrying out a massacre and said the US Embassy move had encouraged them.

The non-government international organization Human Rights Watch said: “The policy of Israeli authorities to fire irrespective of whether there is an immediate threat to life on Palestinian demonstrators in Gaza, caged in for a decade and under occupation for a half century, has resulted in a bloodbath that anyone could have foreseen.”

Tens of thousands of Palestinians had streamed to the coastal enclave’s land border, some approaching the Israeli fence - a line Israeli leaders said Palestinians would not be allowed to breach.

Clouds of black smoke from tyres set alight by demonstrators rose in the air. Demonstrators, some armed with slingshots, hurled stones at the Israeli security forces, who fired volleys of tear gas and intense rounds of gunfire.

“Today is the big day when we will cross the fence and tell Israel and the world we will not accept being occupied forever,” said Gaza science teacher Ali, who declined to give his last name.