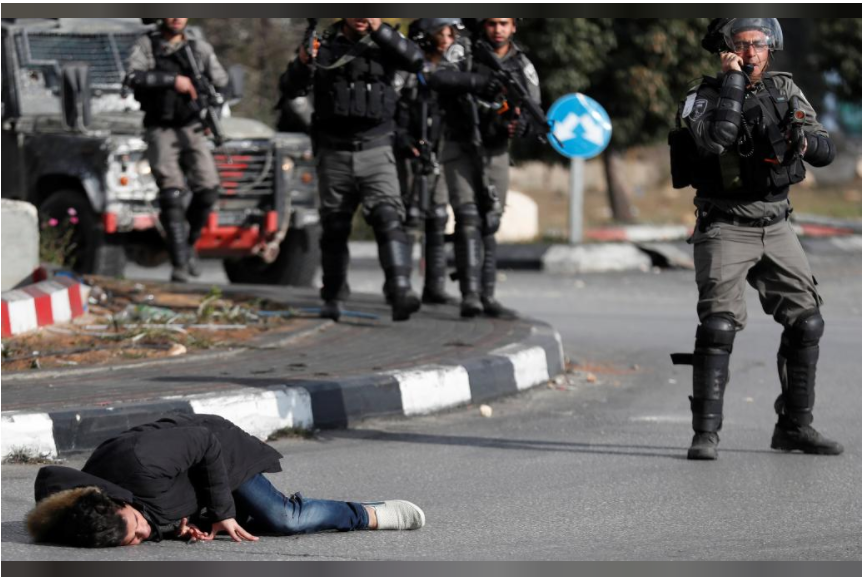 A Palestinian man lies on the ground after being shot by Israeli border policemen near the West Bank city of Ramallah December 15, 2017. Photo: REUTERS/Goran Tomasevic

Most of the casualties were on the Gaza Strip border, where thousands of Palestinians gathered to hurl rocks at Israeli soldiers beyond the fortified fence. Medics said two protesters, one of them wheelchair-bound, were killed and 150 wounded.

In the occupied West Bank, another area where Palestinians are seeking statehood along with adjacent East Jerusalem, medics said two protesters were killed and 10 wounded by Israeli gunfire.

One of the dead was a man who Israeli police troopers said was shot after he stabbed a member of their unit. Reuters witnesses said the Palestinian held a knife and wore what looked like a bomb belt. A Palestinian medic who helped evacuate the man for treatment said the belt was fake.

Palestinians -- and the wider Arab and Muslim world -- were incensed at Trump’s Dec. 6 announcement, which reversed decades of U.S. policy reticence on Jerusalem, a city where both Israel and the Palestinians want sovereignty.

Gaza’s dominant Hamas Islamists, which reject coexistence with Israel, called last week for a new Palestinian uprising, but any such mass-mobilisation has yet to be seen in the West Bank or East Jerusalem.

There have been almost nightly Gazan rocket launches into Israel, so far without casualties. Israel has responded with air strikes on Hamas facilities, one of which killed two gunmen.

The Israeli military said that, on Friday, about 3,500 Palestinians demonstrated near the Gaza border fence.

“During the violent riots IDF (Israel Defence Force) soldiers fired selectively towards main instigators,” the military said in a statement. 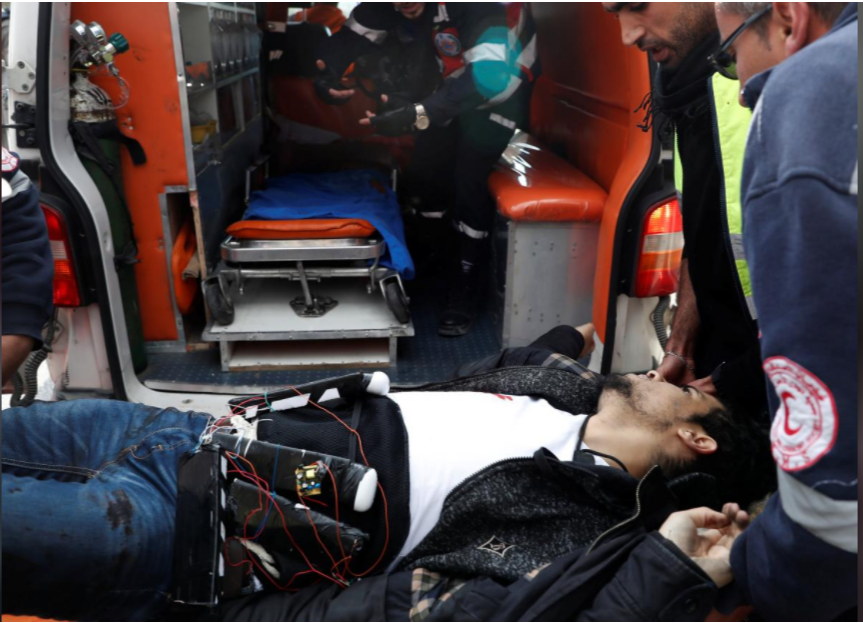 A Palestinian man with what looks like an explosive belt shot by Israeli policmen near the West Bank city of Ramallah December 15, 2017. Photo: Reuters

A military spokeswoman had no immediate comment on the wheelchair-bound protestor, Ibrahim Abu Thuraya. Abu Thuraya, 29, was a regular at such demonstrations. In media interviews, he said he had lost both his legs in a 2008 Israeli missile strike in Gaza.

In the West Bank, the Israeli military said that about 2,500 Palestinians took part in riots, rolling flaming tires and throwing fire bombs and rocks at soldiers and border police.

Israel captured East Jerusalem, an area laden with Jewish, Muslim and Christian shrines, from Jordan in the 1967 war and later annexed it in a move not recognized internationally.

Palestinians hope that part of the city will be the capital of a future independent state and Palestinian leaders say Trump’s move is a serious blow to a moribund peace process.