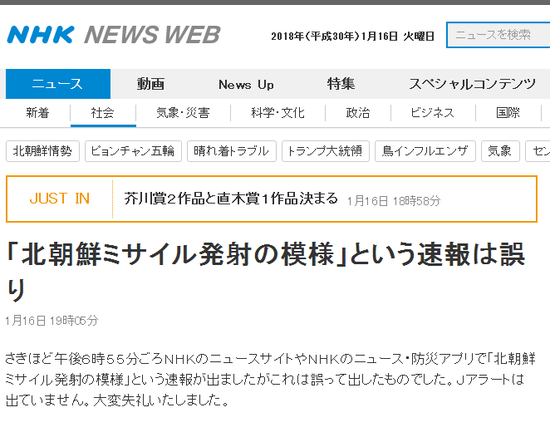 Japan's public broadcaster on Tuesday mistakenly flashed that North Korea appeared to have launched a missile, warning people to take cover before apologising for the error only minutes later.

A news alert saying: "It appears North Korea launched a missile... 'Evacuate inside buildings or underground': government" was published by the NHK website and app at 6:55 pm local time (0955 GMT).

But after just five minutes, NHK admitted the alert was sent in error.

It comes just days after a false cellphone alert warning of an incoming ballistic missile terrified residents in Hawaii.

Japan and North Korea have a tense relationship, with Pyongyang routinely issuing verbal threats as well as firing missiles near or above Japan.

"I was surprised but it was a mistake. Do your work, NHK!" urged another.

The mistake also comes less than two weeks after a fake earthquake alarm in Tokyo, where millions of residents received an alert warning them that a strong quake was about to hit the Japanese capital.

In Hawaii, the notification was sent out on Saturday, lighting up phones with a disturbing alert urging people to "seek immediate shelter."

But it took nearly 40 minutes for a corrected message to be issued -- with Hawaii's governor saying there was no automatic way to cancel the false alarm, meaning it had to be done manually.