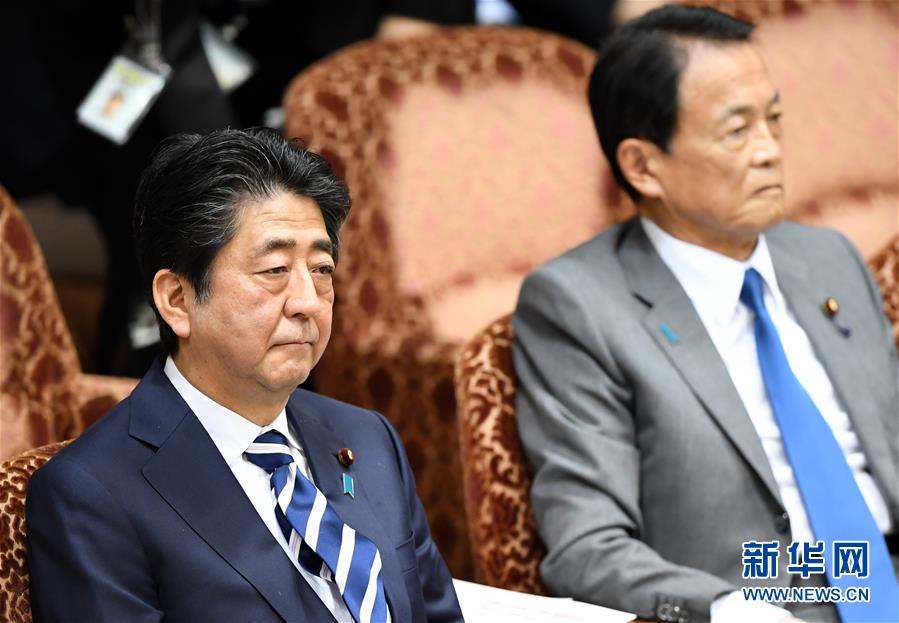 Prime Minister Shinzo Abe vowed Sunday to press on with his controversial move to amend Japan's pacifist constitution, undeterred by a political scandal that has dented his popularity.

Abe's political capital is dwindling due to a widening scandal over the cut-price sale of government land to one of his supporters, with the opposition suggesting his wife Akie may have played a role.

The scandal worsened when finance ministry bureaucrats admitted altering official records of the sales, erasing references to Abe and his wife as well as other political figures.

"I will thoroughly investigate and show the whole picture of what happened," Abe told the annual meeting of the ruling Liberal Democratic Party.

"And I will fulfil my duty by rebuilding the (government) organisation so that this will not happen again," he said, reiterating his resolve to stay in power.

Abe has denied any involvement by him or his wife in the case but protesters have staged rallies across the nation.

His approval rating has fallen to its lowest level since his return to power at the end of 2012.

National attention is turning to parliamentary testimony scheduled for Tuesday by Nobuhisa Sagawa, formerly the head of the finance ministry department that oversaw the land deal.

Despite his fading popularity, Abe told the party gathering he was committed to changing the constitution, imposed by the United States on the defeated nation after World War II.

Abe said he wants to end the debate over the constitutionality of Japan's military, officially known as the Self-Defence Forces (SDF). The constitution says Japan renounces war and will not maintain land, sea or air forces.

Scholars have long argued about whether the existence of the SDF is constitutional.

The military is well regarded by the general public, and there is widespread acceptance of the government's traditional view that they should be used only for self-defence.

Abe, however, in 2015 expanded the role of the Japanese forces to include the defence of friendly nations, prompting protests from scholars and voters alike that the change violated the constitution.

"Now is the time to reform the constitution," said Abe. "Let us end this unconstitutionality debate."

His conservative coalition holds a two-thirds "super majority" in the 465-seat lower house, giving him the numbers to realise his long-held dream.