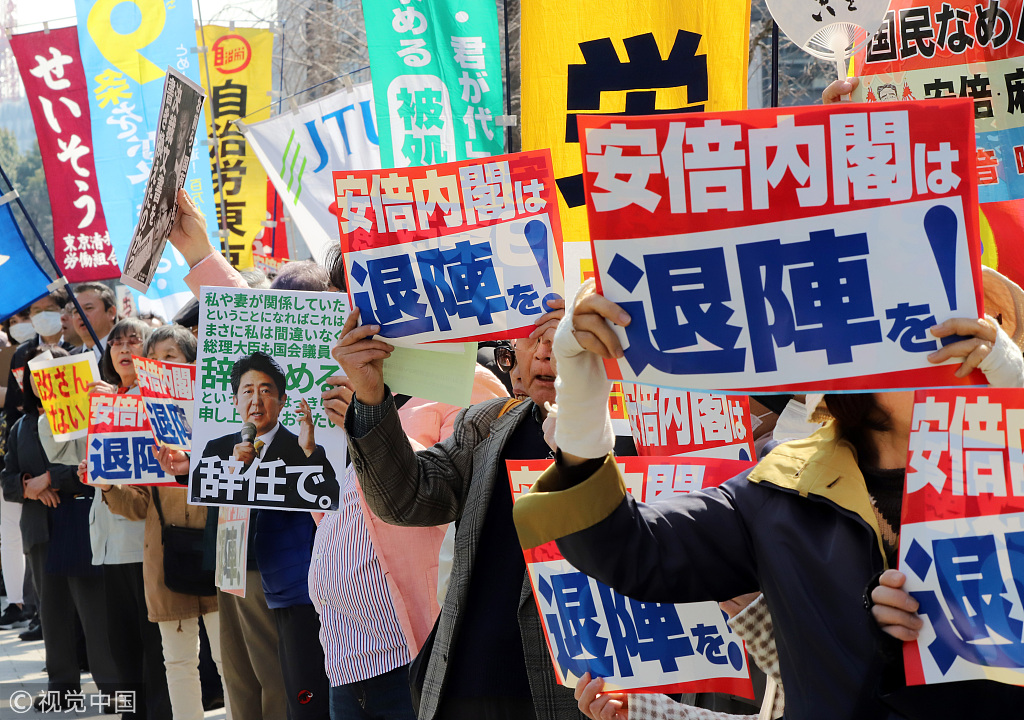 Protestors hold placards and chant slogans to demand Prime Minister Shinzo Abe's resignation at a rally in front of the National Diet in Tokyo on March 13, 2018. (Photo: VCG)

Japanese Prime Minister Shinzo Abe was under fire again and faced increasing pressure to resign after the revelation of the Finance Ministry documents had been altered about a cut-price land deal scandal.

Japanese Finance Minister Taro Aso admitted on Monday that 14 of the original documents and 310 places of the documents were altered before being submitted to parliament for scrutiny last year.

In the altered version, quotations from Moritomo Gakuen, a private school operator which was planning to build an elementary school in Osaka, were deleted. The quotes said that Abe’s wife Akie Abe recommended the project.

The latest development of the scandal irritated the public, triggering protests to call for the resignation of Abe and Aso.

The scandal was first thrust into the media limelight in February 2017.

It was reported that Moritomo Gakuen bought an 8,770-square-meter piece of land in June 2016 in Toyonaka, Japan at a price of 134 million yen ($1.26 million),  amounting to only 14 percent of its appraisal price.

The land was intended for a new elementary school to be opened in April last year with Abe's wife Akie as its honorary principal. However, after the scandal broke out, she stepped down from the position.

Abe denied his and his wife’s involvement in the deal, saying that he "would quit as prime minister and as a Diet member" if he or his wife was found involved in the land deal.

According to a new poll by Japan’s public broadcaster NHK, support for the Abe government fell to its lowest since he won re-election in October.