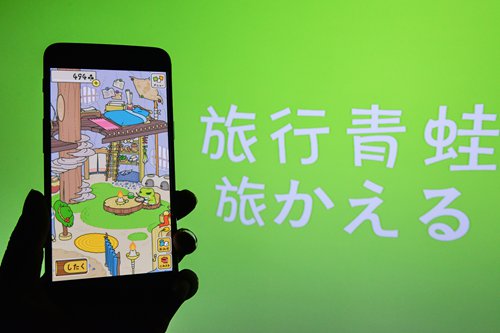 "Where has your frog been?" has recently become one of the most popular greetings among young urban residents in China.

The frog they're talking about is actually a digital character from the Japanese mobile game Tabi Kaeru, or Traveling Frog, that recently became a hit among young Chinese gamers. A Hit-Point Co production, the game has remained at the top of the Chinese mobile app download ranks since Sunday and remains one of the most discussed topics on Chinese social media platforms. So far, the app has been downloaded more than 1 million times on Shanghai-based mobile game-sharing platform Taptap since its release on December 6, 2017. Meanwhile on Sina Weibo, the hashtag #TravelingFrog has so far garnered more than 300 million views.

In the game, gamers name a frog and help it prepare for a short vacation. Using clovers collected in the frog's backyard as money, gamers can buy food and a series of travel items such as tents that the frog will take on its trip. However, players have no control over where the frog will go nor when it will depart or return. While the frog is off seeing the world, all players can do is to wait. If they are lucky enough, they may receive postcards and items from the frog showing where it has been.

Many players have described waiting for their frog as "bitter-sweet" - a feeling that the slow-paced game's fans across the country resonate with.

"My froggy went to a new place and made new friends!""Where has my frog been? He hasn't been home since yesterday…Miss him..." "Will my frog starve? He didn't bring any food this time!" Comments like these are some of the most commonly seen shared among the game's fans on Sina Weibo as well as on their WeChat Moments page.

Although the company has not yet released a Chinese version of the game, language apparently has not been a major barrier for Chinese fans. They went to such great lengths to search online platforms for "frog-raising" guides in Chinese - most of which have been compiled by fans who know Japanese. This helped push "Traveling Frog guide" into the top 10 most-searched keywords list on Sina Weibo on Wednesday.

Fans are also posting detailed introductions to the places that their frogs have traveled as well as the food and items they have brought back, most of which have their roots in Japanese culture.

Some fans have become so attached to their digital companion that some have even started referring to their frog as their "child."

"Waiting anxiously for my froggy child's return home while busily making money to pay for his next journey actually made me think of my mother," Wu Qian, a 26-year-old Beijing-based fan of the game, told the Global Times. "Playing the game has actually made me reflect more on my relationship with my parents."

However, for some people who have started playing the game after hearing about how big it has gotten, it's kind of boring.

"I started playing it because everyone around me was talking about it… but I soon got bored by the simple setting and limited interactions with the frog," Yang Rui, a 24-year-old Suzhou-based office worker, told the Global Times.

According to a Wednesday article from the Beijing News, the main factor behind the popularity of the game could be due to the similarities between young people in China and Japanese today.

"A frog that lives and travels alone and has few interactions with others is actually a digital reflection of many young Chinese today who enjoy a less stressful and more self-reliant single life," which is kind of similar to young Japanese today who also are singles who don't interact socially that much, the article wrote.