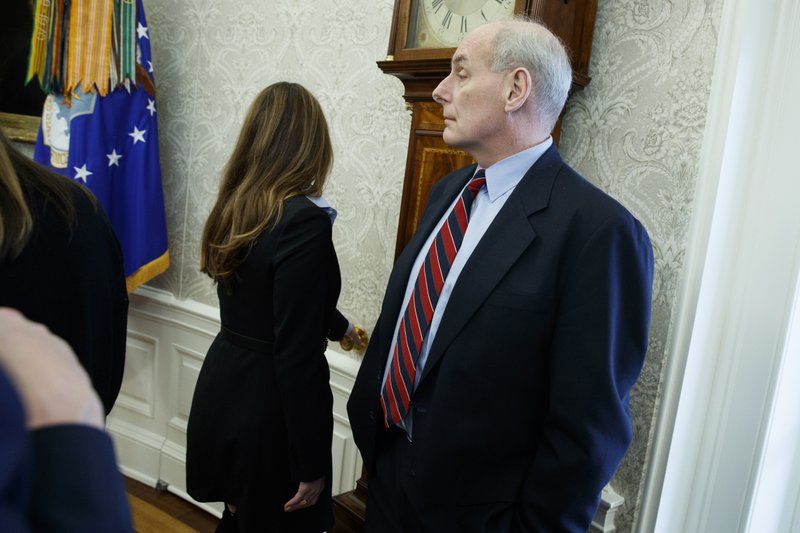 The Latest on the resignation of White House staff secretary Rob Porter (all times local):

The White House announced Wednesday that Porter had resigned. That same day, it issued a statement from Kelly praising Porter.

Kelly’s handling of the Porter matter has cast a harsh spotlight on the chief of staff, who has recently drawn the ire of President Donald Trump.

But a White House official said Friday that Kelly has not offered his resignation.

Porter has denied the allegations and blamed a “smear campaign” against him.

President Donald Trump says he hopes an aide who resigned this week in the wake of domestic abuse allegations has “a great career ahead of him.”

Trump tells reporters at a surprise appearance Friday that former White House Staff Secretary Rob Porter did “a very good job while he was in the White House” and adds: “We wish him well.”

Porter has been accused of domestic abuse by two ex-wives and a former girlfriend. He has denied the charges.

Trump tells reporters he was surprised by the abuse allegations and called the news “very sad.”

Trump is also stressing that Porter maintains he is innocent. He says: “I think you have to remember that.”

Pressure is mounting on White House chief of staff John Kelly amid questions about his defense of a senior aide he fought to keep in a highly sensitive West Wing job despite accusations of spousal abuse from two ex-wives.

White House staff secretary Rob Porter, a member of President Donald Trump’s inner circle and arguably Kelly’s closest aide, cleaned out his desk on Thursday. But the aftershocks of his resignation continue amid concerns about his access to classified information.

Kelly himself faced criticism for initially defending his aide — only to later shift course after the publication of photos showing one of Porter’s ex-wives with a black eye.