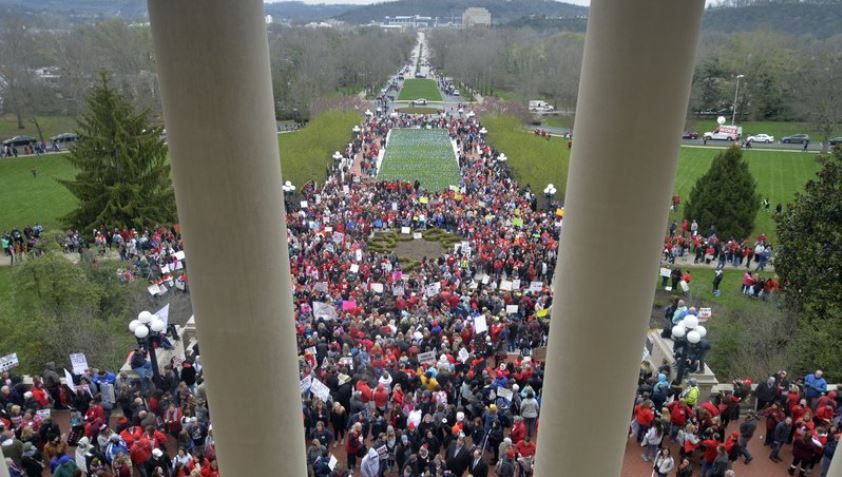 Thousands of teachers from across Kentucky gather outside the state Capitol to rally for increased funding and to protest last minute changes to their state funded pension system, Monday, April 2, 2018, in Frankfort, Ky. Thousands filled the state Capitol in Kentucky on Monday to protest teacher pension changes, and schools were closed statewide in Oklahoma as thousands more educators rallied for increased education funding. (Photo: AP)

The state Capitol in Kentucky filled with teachers protesting pension changes Monday, and thousands of Oklahoma educators walked out of classrooms in the latest evidence of teacher rebellion in some Republican-led states over education cuts.

Oklahoma Gov. Mary Fallin signed legislation last week granting teachers’ pay raises of about $6,100, or 15 to 18 percent. But some educators say that isn’t good enough and walked out.

“If I didn’t have a second job, I’d be on food stamps,” said Rae Lovelace, a single mom and a third-grade teacher at Leedey Public Schools in northwest Oklahoma who works 30 to 40 hours a week at a second job teaching online courses for a charter school. 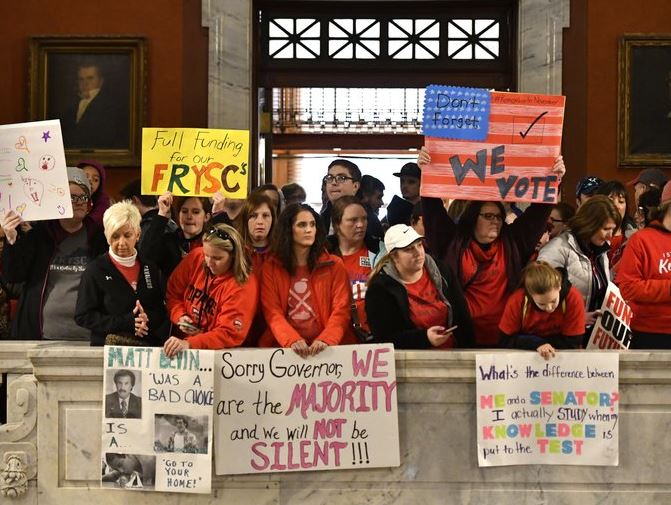 Teachers from across Kentucky fill the state Capitol to rally for increased funding and to protest last minute changes to their state funded pension system, Monday, April 2, 2018, in Frankfort, Ky. (Photo: AP)

The demonstrations were inspired by West Virginia, where teachers walked out for nine days earlier this year and won a 5 percent increase in pay. Teachers in Arizona are now considering a strike over their demands for a 20 percent salary increase.

“Their success has shown us that collective activity can work,” Kentucky teacher Corey Sayre said of the West Virginia walkout.

Many Oklahoma schools, including the three largest districts, Oklahoma City, Tulsa and Edmond, are closed Monday to honor the walkout. Some schools are offering free meals to students aged 18 or younger while various churches, faith organizations and charitable agencies are providing free day-care services. Spring break was last week in many Oklahoma districts. 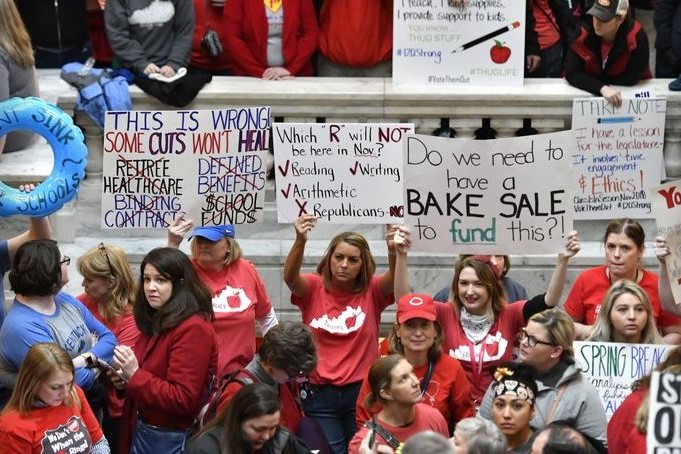 Teachers from across Kentucky hold up signs as they fill the state Capitol to rally for increased funding and to protest last minute changes to their state funded pension system, Monday, April 2, 2018, in Frankfort, Ky. (Photo: AP)

Oklahoma ranks 47th among states and the District of Columbia in public school revenue per student, nearly $3,000 below the national average, while its average teacher salary of $45,276 ranks 49th, according to the most recent statistics from the National Education Association.

In Frankfort, Kentucky, teachers and other school employees gathered outside the Kentucky Education Association a couple of blocks from the Capitol, chanting “Stop the war on public education” and held signs that say “We’ve Had Enough.”

“We’re madder than hornets, and the hornets are swarming today,” said Claudette Green, a retired teacher and principal.

Kentucky teachers chanting “We won’t back down” crammed into the Capitol, filling the Rotunda and hallways near the House and Senate chambers. Schools across the state were closed, due either to spring break or to allow teachers and other school employees to attend the rally.

The rally is happening after hundreds of teachers called in sick Friday to protest last-minute changes to their pension system. Teachers have rallied several times during Kentucky’s legislative session to protest the pension bill, but Monday was by far their biggest event.

Republican lawmakers in Kentucky passed a pension overhaul Thursday that preserves benefits for most workers but cuts them for new teachers. The move was done in response to one of the worst-funded teacher retirement systems in the country at 56 percent and in defiance of a powerful teachers union that vowed political retribution. Opponents objected that the pension changes were inserted into an unrelated bill without a chance for public input, and worry that the changes will discourage young people from joining the profession.

Republican Gov. Matt Bevin has not yet signed the bill, but last week tweeted his support, saying public workers owe “a deep debt of gratitude” to lawmakers who voted to pass it.

During Monday’s rally, some teachers, angry at lawmakers who supported the bill, chanted “Vote them out.”

Melissa Wash, a first grade teacher form Gallatin County who has been teaching for 19 years, said she voted for Bevin, but now plans to become a Democrat. To the lawmakers who voted for the pension overhaul, she said: “You better not count on another year in office.”