HEADLINE Kenya opposition leader Odinga has himself sworn in as 'president'

Kenya opposition leader Odinga has himself sworn in as 'president' 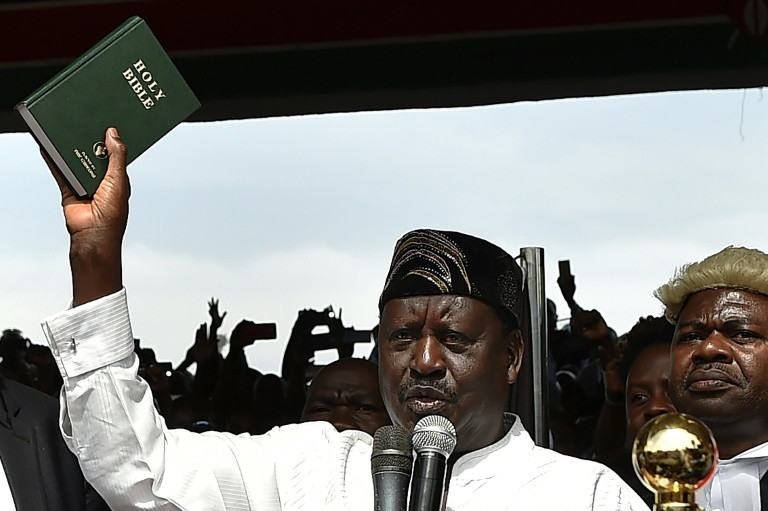 Kenyan opposition leader Raila Odinga held a mock inauguration Tuesday in front of thousands of supporters, as the government sparked outrage by shutting down key media broadcasters covering the event.

Authorities have repeatedly warned that such an inauguration was treasonous and that Odinga could face arrest.

However as the wording of the oath was different to that in the constitution, the consequences of Odinga's act of political theatre were unclear.

"I Raila Amolo Odinga, in full realisation of the high calling, assume the office of the People's President of the Republic of Kenya," he said in the brief and chaotic ceremony, prompting the sea of people to erupt with joy.

"We have accomplished our promise to Kenyans," said Odinga, 73, who was not accompanied by his three fellow leaders of the National Super Alliance (NASA) coalition. Afterwards he quickly departed and the packed venue emptied out in minutes.

While police stayed away, allowing the ceremony to go ahead, the government hit back with interior minister Fred Matiang'i designating as an "organized criminal group" the opposition's "National Resistance Movement (NRM)" wing, tasked with implementing a threatened programme of boycotts and civil disobedience.

It also blocked live television broadcasts of the event, sparking outrage days after the government allegedly warned broadcasters not to cover it.

"President (Uhuru) Kenyatta expressly threatened to shut down and revoke the licences of any media house that would broadcast live," the Editors' Guild said in a statement, referring to a meeting that media bosses were summoned to last week.

"The guild is appalled by the details of the meeting which was held under an atmosphere of intimidation for the media representatives present."

The Kenya National Commission on Human Rights (KNCHR) in a statement called for "credible and expeditious investigations into any form of illegal switch off".

The country's Union of Journalists meanwhile slammed a measure "so draconian that (it) can only strengthen our resolve to carry out our duties as a watchdog."

Odinga, a veteran opposition leader, has refused to accept Kenyatta's re-election, which came after a deeply divisive 2017 polls season in which rights activists say at least 92 people were killed.

First was an election on August 8, won by Kenyatta and then annulled in a historic decision by the Supreme Court, which ordered a re-run on October 26.

Claiming the poll would not be fair, Odinga boycotted the second vote and Kenyatta won with 98 percent.

Observers had said that the swearing-in would only further divide the nation and the crackdown on press freedom is likely to add to concerns about the state of Kenyan democracy.

While the government and police had initially vowed to block the inauguration, officers kept their distance on the day.

"Let them have the park and carry on with their political activities as long as it is within the law," a senior officer said.

At the Uhuru Park venue, a middle-aged businessman in a suit who did not want to give his name, told AFP the swearing-in was highly symbolic.

"There is a psychological benefit that people feel their voices are heard, but more important it will mark the real start of our resistance," he said.

"The government has completely detached itself from the people, but what are the instruments of power without the people?"

Since boycotting the re-run poll, citing a lack of reform at the election commission, NASA's strategy has been to challenge Kenyatta's legitimacy by seeking to establish parallel government structures.

Opposition politicians have convened so-called "people's assemblies" in some counties and the inauguration of Odinga as "people's president" is seen as the culmination of this process.