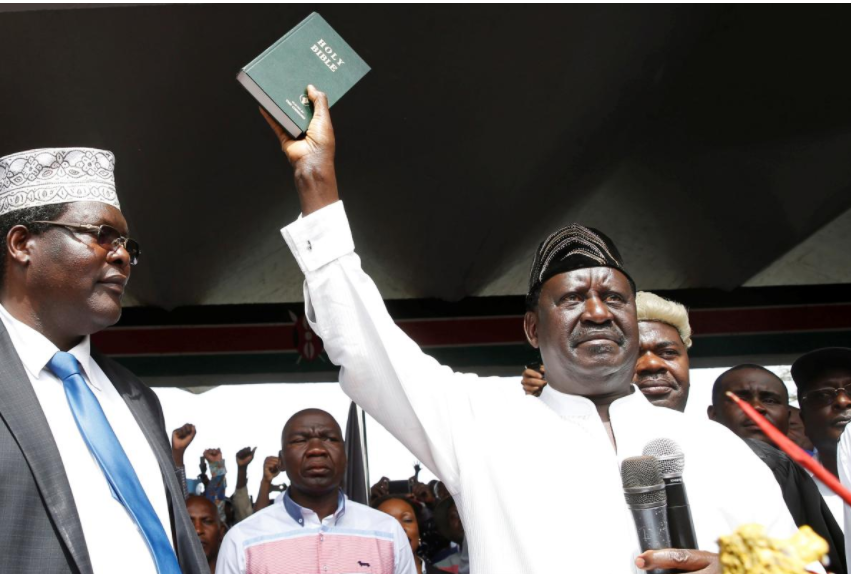 “I, Raila Amolo Odinga, in full realization of the high calling, assume the office of the People’s President of the Republic of Kenya,” said Odinga during a brief and chaotic ceremony, which earlier had been prohibited by law enforcement officials.

Arriving alone and with a Bible in one hand, he stood in the middle of a crowd.

The three remaining members of the newly-created coalition were absent. Odinga said that answers would come later and reassured people that Musyoka would take an oath of office at a later time.

The informal “inauguration” was originally scheduled for December, and today’s event only lasted five minutes.

Odinga, 72 yeas old and Kenya’s former Prime Minister, said Tuesday was a “historic day,” and an extra step towards democracy.

In the first election on August 8, Odinga lost by a 10 percent margin to Kenyatta. But the Kenyan Supreme Court annulled the results and set a new election for October 26.

“This ‘inauguration’ organized by opposition may scare once again investors and tourists,” said one Nairobi merchant.

Beginning in August and running through December, presidential elections and violence have served a blow to Kenya’s tourism industry. And now many locals are having a hard time just trying to make ends meet.

“We need peace and business, but no more chaos,” the Kikuyu merchant said, who explained that he supported Kenyatta because they share the same ethnicity.

To a certain extent, Kenya’s democratic election was characterized by the imprints of different nations and tribes.