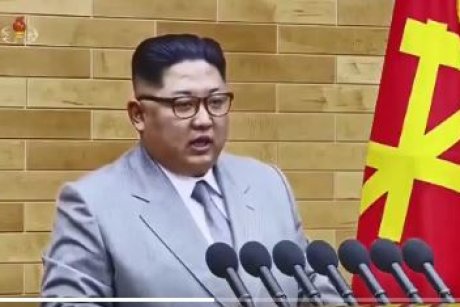 North Korean leader Kim Jong Un said on Monday (January 1) during a televised New Year's Day speech that the United States will never be able to start a war against North Korea now that his country has developed the capability to hit all of the U.S. mainland with its nuclear weapons.

North Korea tested intercontinental ballistic missiles and conducted its sixth and most powerful nuclear test in September in defiance of international warnings and sanctions, raising fears of a new conflict on the Korean peninsula.

Kim also said it is imperative to lower military tensions on the Korean peninsula and improve ties with the South, and he will consider sending a delegation to the winter Olympics Games to be held in Pyeongchang, South Korea, in February.

South Korean President Moon Jae-in has said North Korea's participation will ensure safety of the Pyeongchang Olympics and proposed last month that Seoul and Washington postpone large military drills that the North denounces as a rehearsal for war until after the Games.