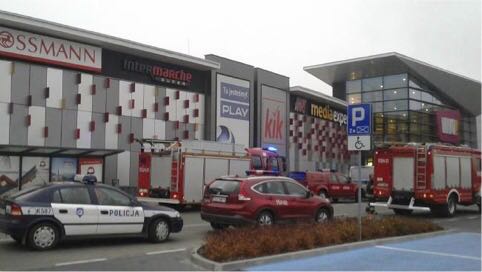 Police and firefighters' cars and trucks stand in front of the shopping mall where a 27-year-old man killed one person and injured several others with a knife in Stalowa Wola, southeastern Poland. (photo/AP)

Warsaw, Poland—The 27-year-old Polish man, identified in local media as Konrad K, allegedly stabbed shoppers with a knife at random at the shopping mall on Friday afternoon in Poland's southeastern city of Stalowa Wola. He was detained by shoppers and handed over to police when they arrived, according to the regional police in Rzeszow."He was attacking people from behind, hitting them with the knife,”Anna Klee, the regional police spokeswoman in Rzeszow told the PAP news agency.Images and videos have surfaced on social media, showing victims lying in a pool of blood with emergency service crews attending to them.

Regional governor Ewa Leniart said five women and four men between 18 and 50 had been stabbed.The alleged attacker is now in police custody but the police did not identify his motive. Eight people were taken to the hospital in Stalowa Wola, Tarnobrzeg and Sandomierz. Most of them are seriously injured, the regional police chief Krzysztof Pobuta told the reporters.

Pobuta said the attacker was in an emotional state when he stabbed people.  He has no previous criminal record. "There's no terrorist or ideological context for the attack.He is in poor psychological condition," Pobuta said.A search of the alleged attacker's home revealed medical documents written that he was a psychiatric patient, National Police spokesman Mariusz Ciarka said.Prime Minister Beata Szydlo returned from a European Union summit in Brussels, calling the attack "very sad news" through a spokesman. She said that the authorities will offer full assistance to the victims and their relatives.