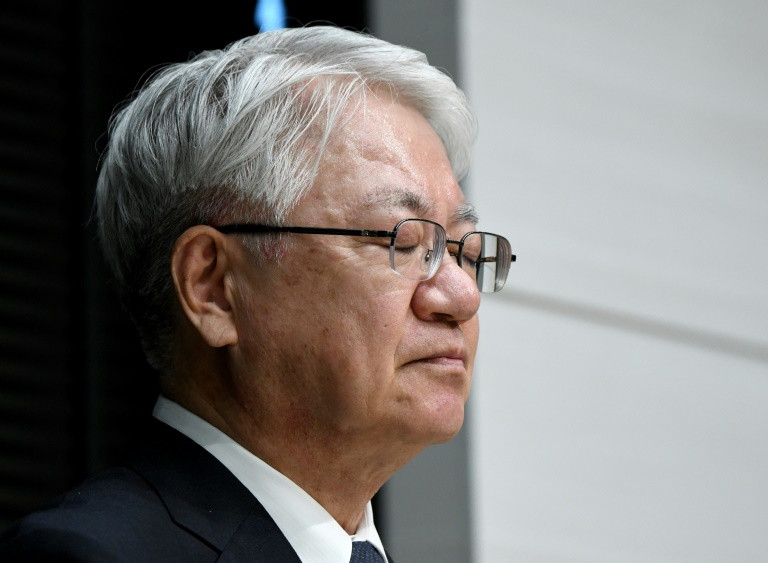 The head of scandal-hit Japanese steelmaker Kobe Steel announced his resignation on Tuesday after the firm submitted false strength and quality data for products shipped to hundreds of clients worldwide.

Following a deep and prolonged bow in apology, Kawasaki told reporters: "As I think it's best to go ahead quickly with reforms under new members, I ... will step down from president on April 1 this year."

"We have caused trouble to many people. As soon as we can, we would like as many people as possible to think that Kobe Steel has changed," added Kawasaki, who had been in the job since 2013.

The firm has not yet named a successor but pledged to hold a board meeting "in the near future" to select someone to turn the ship around.

A long-awaited report revealed that the scandal was more widespread that first thought, with 163 more clients affected than initially identified.

The document drew the veil on a web of falsification at various levels of the company, a venerable old firm that once employed Prime Minister Shinzo Abe.

"We take it very seriously the fact that the misconduct took place at many locations within the Kobe Steel group," the report said.

The investigation found staff -- including in some cases executives -- changed inspection data, or made up data, before shipping their products.

Kobe Steel has "deep-seated issues" relating to its corporate culture and compliance, the report admitted.

"For over 112 years since its founding, the Kobe Steel group has managed its business by valuing the trust of its customers ... The recent loss of such trust is truly regrettable," added the report.

"We will go back to our roots ... and commit ourselves to making this moment a true turning point."

Senior executive Makoto Mizuguchi told reporters it was the firm's "understanding" that the misconduct stretched back as far as the 1970s.

Kobe Steel vowed to overhaul its compliance procedures and internal structures, ensuring a third of the board are independent outside directors.

In addition to the resignation, all company directors will have their pay docked by between 10 and 50 percent for a period ranging from one to four months.

The products affected by the scandal included steel wires used in car engines and tyres as well as aluminium used to manufacture Japan's famous bullet trains.

The firm, founded in 1905, has been at pains to stress there are no safety issues arising from the fake data.

Executives have previously warned of "extraordinary losses" from the scandal, which reportedly affected more than 30 foreign companies, including Boeing, Airbus and General Motors.

Kobe Steel stock has lost some 18 percent since the affair broke in early October last year.

However, Hiroaki Hiwata, strategist at Toyo Securities, said the market might take the resignation as a sign to buy the stock.

"The market would take the stepping down of its chief executive as a positive factor after a set of scandals on expectations that the problem will be cleared up. But we have to keep watching developments" after the change of leadership, Hiwata told AFP ahead of the announcement.

Moments before the resignation, Kobe stock closed up a fractional 0.09 percent at 1,110 yen, underperforming the wider market, which rose by nearly two percent.

The Kobe Steel scandal is the latest in a string of humiliations for Japanese industry, once a byword for quality and reliability.

Nissan was forced to recall 1.2 million vehicles after admitting in October that staff without proper authorisation had conducted final inspections on some vehicles intended for the domestic market before they were shipped to dealers.

Subaru also recalled more than 400,000 vehicles from the domestic market after a similar scandal.

Industrial giant Mitsubishi Materials and Toray Industries, one of the world's top carbon-fibre suppliers, admitted late last year that some of their subsidiaries had falsified product data.