Following the Korean film "Spirits' Homecoming," which tells the story of the Japanese conscription of "comfort women"and triggered a strong reaction in South Korea, the film's director launched a sequel called"Spirits' Homecoming, The Unfinished Story."  The South Korean public response to the film remained strong. They said because Japan continues to deny the historical fact, the"comfort women" issue remains.

'Even if we die, history should live on'

In 1943, Jung-min, a carefree 14-year-old Korean girl, was caught by Japanese forces to serve as a comfort woman in Northeast China, in which she met a group of girls of similar age suffering inhuman treatment. In 2016, the film “Spirits' Homecoming” was shown in more than 60 cities in 10 countries and was screened nearly 90,000 times, attracting a total of 3,580,000 viewers. From “The Murmuring” in 1995 to “Spirits'Homecoming, Unfinished Story” and “I Can Speak” this year, South Korea has recorded the story of Japan's "comfort women"and Korea's attitude towards it in the form of documentaries and films hoping that more people will know more about it and pay greater attention to it.

The screenshot of the film"Spirits' Homecoming"

"Spirits'Homecoming, Unfinished Story" was released a year and a half after the launch of "Spirits'Homecoming." In the film, Kim Hak-soon, one of the "comfort women," said that language could not describe her tragic experiences thoroughly, and another victim, Lee Yong Su said, "Even if we die, this history should live on."

The director, Cho Jung-rae, said he was inspired by a painting called “The burned maidens” by Kang Il Chool, one of the "comfort women."The painting shows the "comfort house" covered in thick, black smoke, and young girls being burned by Japanese soldiers. Kang drew it when she underwent psychological treatment. After further contact with "comfort women," Cho decided to capture the history on film. After preparing for 14 years, with 75,270 people raising 1.2 billion won (about 7.1 million yuan), the film was finally completed.

Cho Jung-rae said, "Many people have joined us, because we all believe that justice and hope will live forever." He told us the documentary was named the "unfinished story" because it included some abridged stories and images, and the "comfort women" issue of Japan has not been resolved.

After the film's screening, we met one of the "comfort women," Lee Ok Sun. "What I experienced was much more cruel than what the film shows," Lee said. "I almost died there, so close." The old woman's eyes brimmed with tears.

During the screening, many Koreans also shed tears. "I can't bear to see those scenes," some told us. "We should collect more testimonies of the victims so that more people will know the truth about history." "Nearly 70 years have passed, but the 'comfort women' issue has not been resolved, and the Japanese government has not apologized to the victims. Our young generation should understand the truth about history. Only when a nation faces its history can it have a bright future," Kim, a high school student from Gyeonggi Do, said.

Another movie with the same theme, "I Can Speak," also sparked public sympathy in South Korea. "We were forced to become Japanese sex slaves. Please remember what we have experienced, because it is a tragic history that cannot happen again." In the film, the old woman's speech before the US Congress was sonorous and forceful. 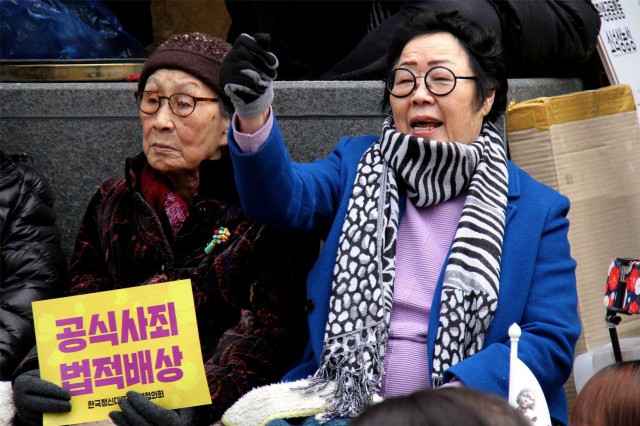 Protestors gathered in front of the Japanese embassy in Seoul on March 1 2017.(Photo:Chen Shangwen/People's Daily)

'There is really little time left for the victims'

Recently, the number of films on "comfort women" has been increasing. South Korean film critic Jung Ji Wook pointed out that in 2015, the agreement between South Korea and Japan on the "comfort women" issue caused strong resentment among the people, which raised the degree of concern that the whole society placed on the problem.  The film industry has gained confidence because of the success of "Spirits'Homecoming." 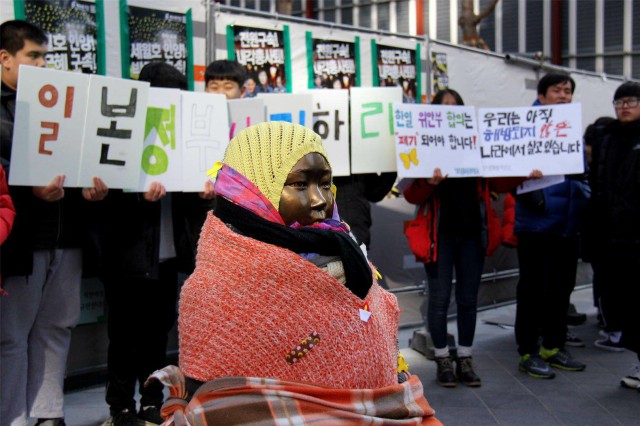 S.Korea students protested in front of the Japanese embassy in Seoul, asking the Japanese government to apologize to the "comfort women" victims. (Photo: Chen Shangwen/People's Daily)

"There is really little time left for those victims,"Cho Jung-rae said. By shooting these films, he does not want to set off hatred towards Japan, but to arouse awareness on the"comfort women"issue, to reveal the historical truth and to avoid future similar war crimes.（Compiled by Wang Jia）