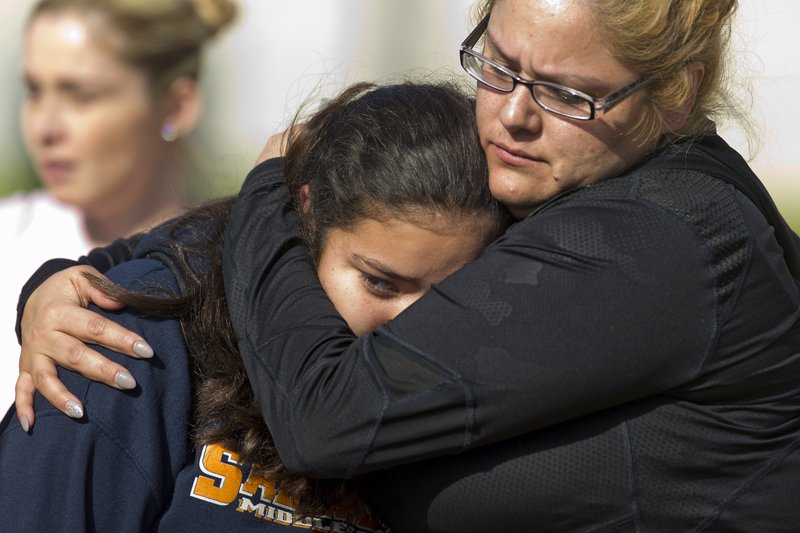 Los Angeles Police spokesman Josh Rubenstein said detectives are trying to figure out where the girl got the gun, which was unregistered, and why she brought it to school. It wasn’t clear what made it fire.

The girl, who was booked on a charge of negligent discharge of a firearm after Thursday’s shooting, has retained an attorney and isn’t answering questions, Rubenstein said.

Jordan Valenzuela, a 12-year-old classmate of the girl’s, told The Associated Press he was in the room next door when the gun went off and talked to her minutes later.

“She was crying,” Jordan said. “She was like, ‘I didn’t mean to. I had the gun in my backpack and I didn’t know it was loaded and my backpack fell and the gun went off.’”

Jordan said he saw a hole in the backpack, which the girl was holding, when she asked him to hide the gun for her.

“I said ‘No,’” he said. “Then I moved away from her because I was a little bit scared.”

Authorities say there is no further threat at a Los Angeles school where two teens were shot and a female student was arrested. A fire department spokesman says a 15-year-old boy shot in the head Thursday morning is in critical but stable condition. (Feb. 1)

The shooting sent children screaming and crying from the classroom as blood poured from the two students who were hit. Police descended on the school, which was put on lockdown, and the girl was arrested without incident.

Terrified parents rushed to the campus and waited for hours to be reunited with their children. Once they did, many children and parents sobbed as they hugged, walking from the school as they held each other.

The 15-year-old boy who was hit in the head with a bullet and initially was in critical condition.

A spokesman at Los Angeles County-USC Medical Center where the children were being treated didn’t respond to messages about his condition Friday, though a doctor treating the boy said he expected him to make a full recovery.

The wrist wound to the 15-year-old girl was considered minor. Three others had superficial face or head injuries, some from broken glass.

A review of shootings nationwide by The Associated Press and USA TODAY Network found that at least 141 deaths of minors were attributed to unintentional or accidental shootings in 2015.

Most accidental shootings involve someone actually handling firearms, as opposed to guns getting dropped, said Pete Gagliardi, a former longtime agent with the U.S. Bureau of Alcohol, Tobacco and Firearms.

“It’s pretty rare to hear about an incident like this,” Gagliardi said of Thursday’s shooting.

He said the gun wouldn’t necessarily had to have been cocked to go off in the girl’s backpack, but mostly likely would have had to have become entangled with something inside the bag for the trigger to have been pressed.

A strikingly similar shooting to Thursday’s happened just south of Los Angeles in Gardena on Jan. 18, 2011, when a gun went off inside a 17-year-old boy’s backpack after he set it on a desk, wounding two students with one bullet, including a girl who was shot in the head.

The boy was charged with bringing a gun to a school zone. A spokesman for the Los Angeles County District Attorney’s Office didn’t immediately respond to a request about the outcome of his case.

The Los Angeles Unified School District has a policy requiring every middle and high school campus to conduct daily random searches by metal-detector wands at different hours of the school day for students in the sixth grade and up.