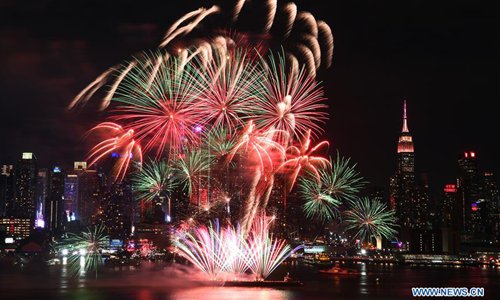 Global landmarks are celebrating the Chinese New Year by turning red, a color symbolizing good luck and happiness, as Chinese communities mark the Spring Festival around the world. The Chinese Year of the Dog arrives on Friday, Feb. 16 this year. According to the latest release of China's State Council Information Office, the Chinese New Year was celebrated in more than 400 cities in more than 130 countries and regions this year. The top of the Empire State Building in Midtown Manhattan, New York, one of world's most beloved attractions, is scheduled to shine in red and gold at sunset on Tuesday and Thursday to celebrate the Chinese New Year. A window display of the Year of the Dog was also installed in the lobby windows on the Fifth Avenue. New York State has added the Spring Festival to its list of public holidays since 2014. In the Egyptian tourist city of Sharm el-Sheikh, the walls and trees at Hollywood Fun Park in the Red Sea resort city were garnished with red Chinese lanterns and colorful Chinese paintings to embrace a three-day celebration. Amid joyful atmosphere of a moonlit breezy night, hundreds of Egyptians joined Chinese to watch traditional lion dance performances in the alleyways of the tourist site to celebrate the biggest festival among Chinese people. As artists performed on stage, Chinese organizers distributed gifts to members of the audience, who hailed from a variety of nationalities. In the New Zealand's city of Auckland, Sky Tower also joined landmarks lighting for Chinese New Year. The tallest man-made structure in the country is scheduled to be lit with a gold-color base and red top from Feb. 15 to March 4. Other landmarks including 540-meter-tall Ostankino Tower in the Russian capital Moscow, Durban City Hall in South Africa and Recife's landmark bridge in Brazil also participated in the Global Tower Lights Up project, blanketed in red for Chinese New Year. Celebrated on the 15th day of the first Chinese lunar month, the Lantern Festival on March 2 this year marks the end of the Chinese New Year Spring Festival. Numerous landmarks and attractions across Europe are set to create a bridge of light with China on March 2 and 3 by turning a shade of red. The European pillar of the light bridge will include 30 sites in 12 EU member states, such as the Grand Place in Brussels and Belgrade Brides in Serbia, with cultural events attended by both local and Chinese communities accompanying the illumination of the landmarks in several locations.