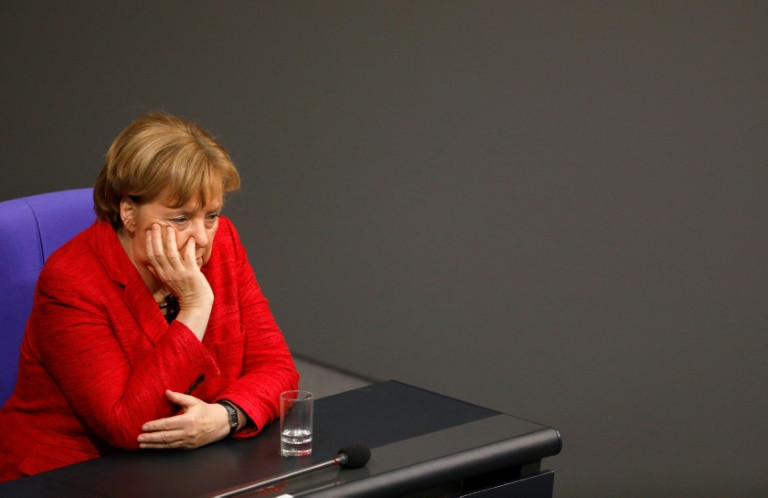 The collapse of coalition talks in Germany has left Chancellor Angela Merkel fighting for her political survival.Photo:AFP

Germany's president held talks with party leaders Tuesday in a last-ditch attempt to save the EU's top economy from the political turmoil sparked by the collapse of Chancellor Angela Merkel's coalition talks.

Frank-Walter Steinmeier, who takes centre stage because he can call snap elections, was expected to use his diplomatic skills as a former foreign minister to persuade reluctant party chiefs to return to the negotiating table.

The head of state -- who spoke with Merkel on Monday and meets Bavarian CSU leaders Wednesday -- held talks with the left-leaning Greens at his Berlin Bellevue Castle and then with the pro-business Free Democrats (FDP) but refrained from making any immediate public comments.

The FDP's shock decision late Sunday to withdraw from a potential three-way alliance has thrown the government of caretaker chancellor Merkel into chaos, leaving her with only bad choices: wooing reluctant coalition partners back to the table, running a minority government, or new elections.

However, the latest polls suggest that a fresh vote now would deliver similar results to the last one, not a game-changing outcome that would allow new coalitions.

New parliament speaker Wolfgang Schaeuble, the former finance minister, opened the legislature by reminding all parties of their promise to voters to deliver a stable government, but also conceded that no-one could be forced to join a government they don't want.

As Germany's usually staid and consensus-driven politics enter uncharted territory, Schaeuble, aged 75 and its longest-serving MP, stressed that the country faces "a trial, not a crisis of state".

He underlined that its EU neighbours "need a Germany that is capable of action". In Brussels, the European Commission made clear that "Europe will not pause during this period". 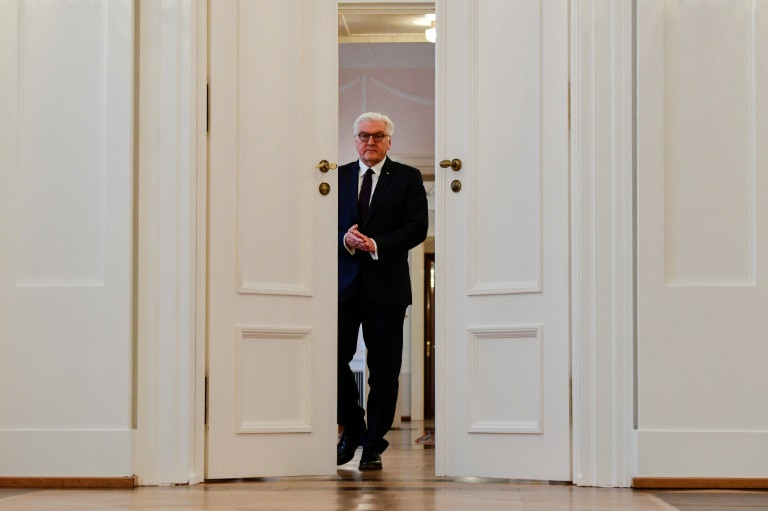 German President Frank-Walter Steinmeier is expected to use his diplomatic skills as former foreign minister to persuade parties to return to the negotiating table after the collapse of coalition talks.Photo:AFP

Sitting in the glass-domed lower house of the Bundestag were lawmakers of the far-right Alternative for Germany (AfD), the anti-immigration, anti-Islam and anti-Merkel protest party that is at the heart of the crisis.

Its entry into parliament in September 24 elections with almost 13 percent of the vote cost Merkel's conservatives and other mainstream parties dearly, further fragmented the party political landscape and made it harder to gain a parliamentary majority.

Merkel's headache was compounded when her former junior coalition partners, the centre-left Social Democrats (SPD), scored a dismal election result and vowed to go into opposition, a decision they have so far refused to budge from.

A subsequent four-week negotiating marathon to forge a new governing alliance dubbed "Jamaica", after the parties' black, yellow and green colours, collapsed when the FDP pulled out.

The FDP's leader Christian Lindner, 38, insisted the party had acted on principle, but most political commentators saw it as a gambit to position itself as a somewhat more moderate protest party to the AfD and snatch away their supporters in fresh elections.

Lindner is turning the FDP into "a bourgeois protest party that opposes a supposed left-liberal mainstream, and especially Merkel," judged Spiegel Online.

"His unspoken aim is: Merkel must go," the commentary added, using a common AfD slogan.

Germany now faces weeks, if not months, of paralysis with a lame-duck government that is unlikely to take bold policy action at home or on the European stage, as the EU faces issues from Brexit to ambitious French reforms plans for the bloc.

"The politics of Europe's most powerful economy -– and until recently its main anchor of stability -– has just entered a period of deep uncertainty," said Eurasia Group, a political risk consultancy.

Angela Merkel, in power for 12 years, now serves only as caretaker chancellor after she failed to win a clear majority in the September 24 elections, largely due to the rise of the far-right Alternative for Germany (AfD) party.Photo:AFP

To mediate in the crisis, Steinmeier was on Thursday due to meet his SPD party colleague Martin Schulz to sound out whether he would reconsider and once more team up with Merkel's bloc -- an option the party chief has strongly rejected so far.

His party's former labour minister Andrea Nahles has suggested the SPD may opt to tolerate a Merkel-led minority government, but this is an unstable option Merkel has dismissed.

Merkel in turn stressed Monday that if it came to fresh elections, likely not before February, she would be willing to run again, dismissing speculation that her 12-year reign is coming to an end.