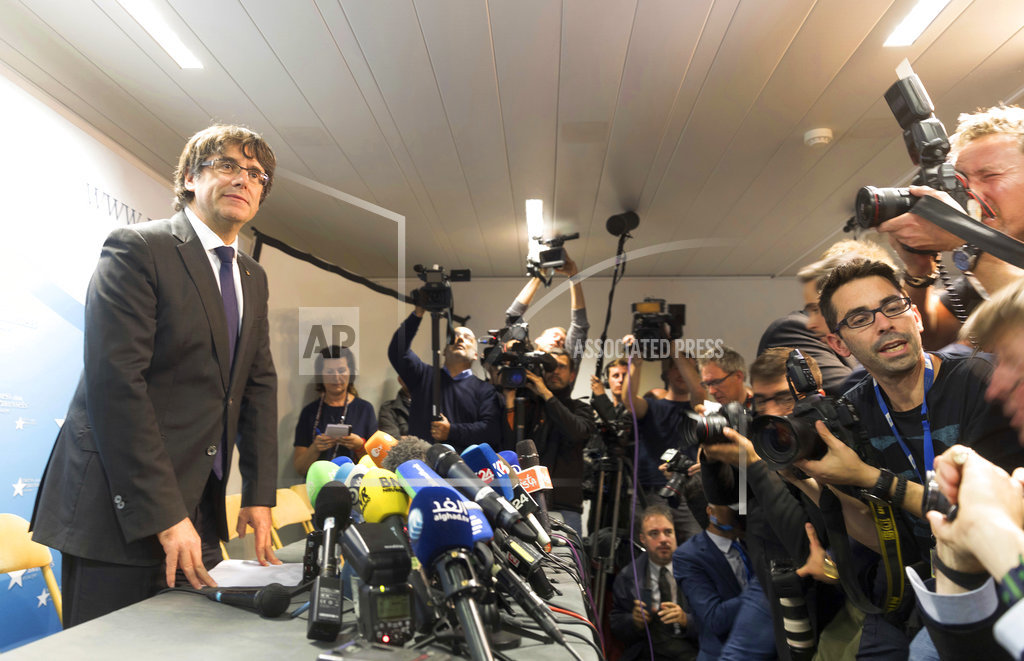 Ousted Catalan leader Carles Puigdemont will not return to Spain for questioning this week by a National Court judge investigating him for possible rebellion charges, his Belgian lawyer said Wednesday, suggesting that he could be questioned in Belgium instead.

The fired Catalan regional government leader flew to Brussels after the Spanish government used special constitutional powers to take control of Catalan affairs Saturday and fired his government. Spain took over running the northeastern region after Catalan lawmakers voted the previous day to secede in Spain's most serious political crisis in decades.

Puigdemont and his 13 former Catalan Cabinet members have been summoned for questioning in Madrid on Thursday and Friday.

All 14 faced possible charges of rebellion, sedition and embezzlement for driving the secessionist bid to a full declaration of independence for the prosperous region that includes Barcelona. Also summoned is Puigdemont's No. 2, Oriol Junqueras. The crimes are punishable with decades behind bars.

"He is not going to Madrid and I suggested that they question him here in Belgium," lawyer Paul Bekaert told The Associated Press in the Belgian town of Tielt, 80 kilometers (50 miles) west of Brussels.

"It is possible, but I don't know yet if it happens, but it is possible. I have already had cases like that in the past, when suspects could be questioned in Belgium," Bekaert said.

He said there was no arrest warrant for Puigdemont at this stage and that his client is "fine and he is self-confident."

There was no immediate reaction from the National Court in Madrid to the suggestion Wednesday, which is a bank holiday in Spain.

Six former Catalan parliament members are also to appear Thursday and Friday before the Supreme Court in Madrid in a parallel probe over possible rebellion.

Puigdemont's Democratic Party of Catalonia said a delegation from the former Catalan ruling coalition, Together For Yes, would travel to Madrid to support the 20 ex-government and parliamentary board members summoned before the two courts.

Puigdemont appeared at a press conference in Brussels on Tuesday, saying he and the five ex-Catalan government colleagues who accompanied him to Belgium were seeking "freedom and safety" from Spanish authorities.

He said he would not return to Spain unless he and his fellow ex-government members received guarantees they would receive "a just, independent (legal) process."

The Spanish investigating magistrate could order their arrest, regardless of whether they show up in court for questioning. Two of the six officials returned to Barcelona from Belgium late Tuesday.

Bekaert told the Belgian VTM network earlier that "as things look now, I cannot see him (Puigdemont) going back in the next few weeks."

The lawyer said that if Spain seeks Puigdemont's extradition it would be up to Belgian judges, not the government, to make a decision on that.

In Spain, European parliament deputy and spokesman for the country's ruling Popular Party Esteban Gonzalez Pons said if Puigdemont fails to appear Thursday before the court, "there'll probably be an extradition petition to Belgium and Belgian police will detain him."

Pons told the Onda Cero radio that Puigdemont's lawyer in Belgium would likely be able to prolong the case until after the new Catalan election called by Spain for Dec. 21.

The Catalan parliament pushed ahead with the secession declaration following a banned Oct. 1 referendum that Puigdemont claimed gave his regional government a mandate to secede. No country or international body has recognized the referendum or the declaration.

Ratings agency Standard & Poor's said Spain's seizing control of Catalonia should have no immediate effect on the country's sovereign ratings and outlook, but it warned of possible problems later in the year. It said the government's decision to intervene and call a new regional election "reduced the likelihood of a short-term escalation of tensions."