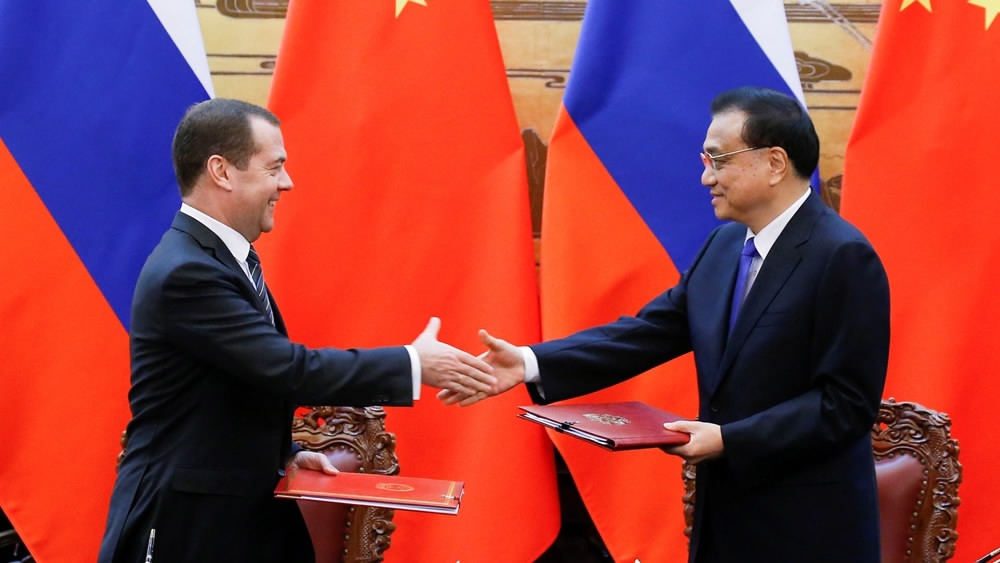 Following a welcoming ceremony outside the Great Hall of the People and a round of talks, they witnessed the signing of cooperation documents on customs, agriculture, finance and energy, and attended the closing ceremony of the China-Russia Media Exchange Year program.

Li and his Russian counterpart said China and Russia will consolidate cooperation in traditional sectors like aerospace and energy, while exploring new development opportunities in areas of small- and medium-sized businesses and the development of Russia's Far East.

Medvedev is leading a delegation of senior officials, including First Deputy Prime Minister Igor Shuvalov, three other deputy prime ministers and a number of ministers.

"China will expand investment in the Far East and introduce more energy supply from the region. It's win-win," said Li.

Russian Prime Minister Dmitry Medvedev speaks during a news conference after talks with Chinese Premier Li Keqiang at the Great Hall of the People in Beijing, November 1, 2017. /Reuters Photo‍

Medvedev said despite world economic slowdown, trade between China and Russia increased by a third in the first eight months of the year.

He believes there is big potential for China and Russia to enhance cooperation, especially in the development of Russia's Far East areas and the promotion of the Chinese currency in Russia and Central Asia.

The world should not be dominated by one currency, Medvedev told reporters, adding that Russia is also working on its own national payment system.

"The world's financial system needs more balance," Medvedev noted. "We're discussing to use our national payment systems, including China's UnionPay. We are also developing our own Mir system." The two countries will issue a joint payment system in the future, he revealed.

The two heads of government spoke highly of bilateral cooperation results in crude oil, gas and coal power, and exchanged views on further cooperation in the field.

According to Medvedev, the two countries will work closer on natural gas and nuclear power projects.

China and Russia are also working together to build civilian aircraft and heavy-lift helicopters.

On people-to-people exchange, a jointly built university by the two countries in southern Chinese city of Shenzhen has begun to recruit students.

As the first foreign leader to visit China following the 19th National Congress of the Communist Party of China (CPC), Medvedev is also expected to meet with President Xi Jinping and Chairman of the Standing Committee of the National People's Congress Zhang Dejiang later on Wednesday.

In a recent interview with Xinhua News Agency, Konstantin Kosachev, chairman of the Russian Federation Council's Foreign Affairs Committee, said Russia and China are looking to jointly build a "fair and multi-polar" world.

The China-Russia Prime Ministers' Regular Meeting was established in 1996.

During his terms of office as president and prime minister, Medvedev has traveled to China five times.