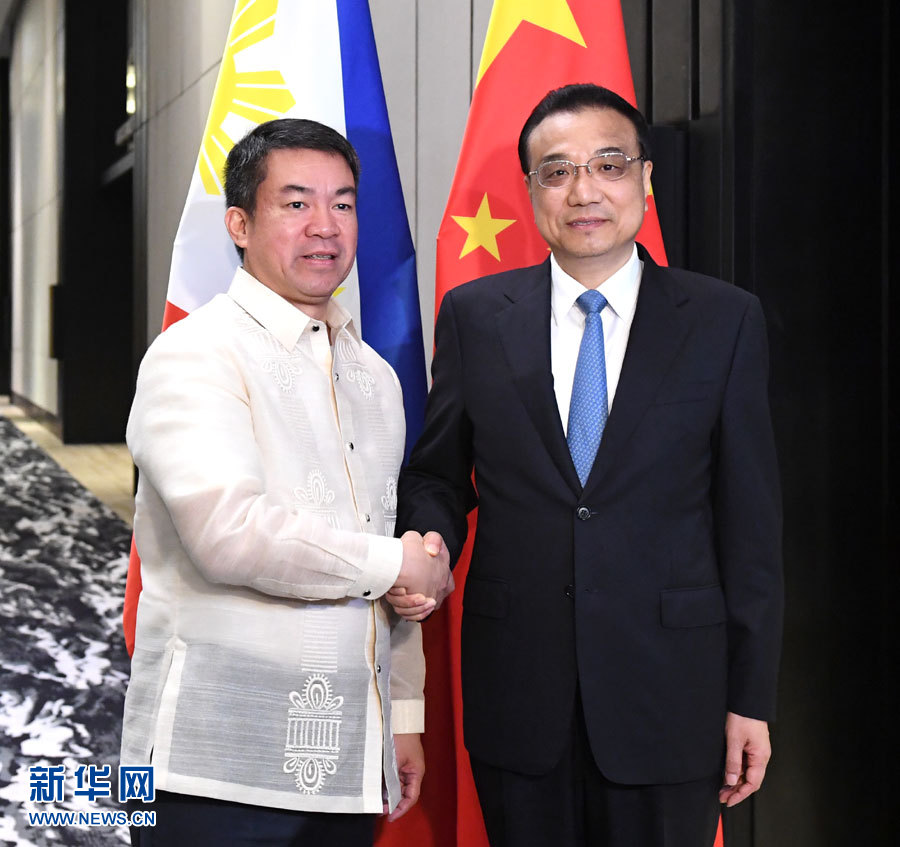 China is willing to hold detailed discussions and formulate ways to cooperate with the Philippines for the next five to 10 years, Premier Li Keqiang said on Wednesday.

"By doing so, this is also sending out a message to the peoples of the two countries as well as the international community that the China-Philippine relationship will continuously grow strong moving forward and people-to-people friendship between us will be further strengthened," he said.

Li made the remark at a news conference joined by Philippine President Rodrigo Duterte at the Presidential Palace in Manila after the two leaders met for talks on Wednesday afternoon. A welcoming ceremony was held by Duterte at the palace before the talks.

Li is on an official visit to the Philippines at Duterte's invitation, the first visit by a Chinese premier to the Philippines in 10 years. He also attended a series of high-level meetings on East Asia cooperation during the visit.

"China seeks to enhance strategic mutual trust with the Philippines, properly handle differences and push for sustained and healthy relationships between our two countries, as we are neighbors," Li said.

Li stressed that China supports the Philippine government's efforts to build infrastructure and fight terrorism and is ready to provide assistance to the reconstruction work in Marawi City in the southern Philippines, announcing that China will provide 150 million yuan ($22.6 million) in grants for improving the living conditions in Marawi.

"We hope the rebuilding in Marawi will be completed at an early date," Li told Duterte.

Calling Duterte's trip to China in October 2016 "an ice-breaking trip between the two countries" that marked a turnaround in bilateral ties, Li said the past year has seen substantial development in China-Philippine ties with pragmatic cooperation.

The two leaders met at a time when China has become the Philippines' top trade partner, its largest source of imports and second-largest source of foreign tourists, with 14 new flights launched between the two countries. In the first seven months of this year, bilateral trade reached $27.86 billion, up 7.6 percent from the previous year.

Noting that both China and the Philippines are developing countries, Li said both governments face the task of developing their economies and improving people's lives.

China-Philippine relations are critical to the overall relationship between China and ASEAN, Li said.

Duterte said the meeting has given him an opportunity to express his gratitude to Li for China's firm support to the Philippines as this year's rotating chair of ASEAN, as well as for China's assistance with its economy, anti-terrorism efforts and maintenance of stability.

He said the Philippines will be committed to pressing ahead with cooperation with China in various fields.

The two leaders witnessed the signing of a series of cooperation documents on infrastructure, technology and finance after the meeting.