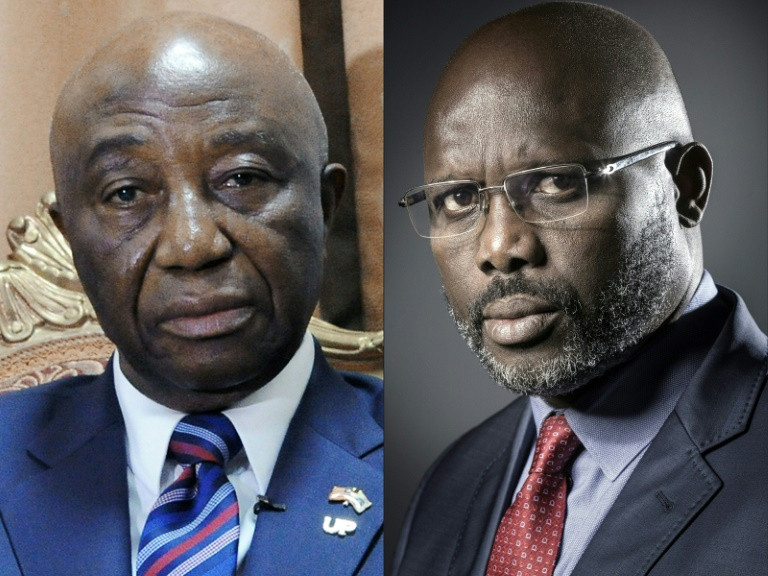 Boakai, left, and Weah were to contest the presidential runoff on Tuesday. But the vote has been placed on hold after the Supreme Court told the country's election watchdog to resolve a complaint by an opposition party

The Supreme Court on Monday indefinitely delayed a vote for Liberia's new president, over an opposition party complaint of electoral fraud, as the vice-president alleged the election was rigged in favour of his opponent.

The court decision throws Liberia's first democratic transition in seven decades into uncertainty a day ahead of what was to have been the final round of voting to pick between former international footballer George Weah and incumbent vice-president Joseph Boakai.

Supreme Court Chief Justice Francis Korkpor said the National Elections Commission (NEC) was prohibited "from conducting the runoff election until the complaint filed by the petitioners is investigated," referring to the opposition Liberty Party.

The two remaining candidates must therefore await the result of the ongoing NEC complaint by a party which neither man belongs to, as well as any Supreme Court appeal.

The whole process could take weeks.

The case was brought by Liberty Party presidential candidate Charles Brumksine, who came third in the first round of voting on October 10.

"The runoff was on condition that the irregularities that we observed would all be addressed adequately," Boakai told AFP, repeating Brumskine's call for the election commissioners to be replaced.

"This election was designed to be rigged," he added.

Liberia's constitution sets out a legal maximum of 30 days following the lodging of a complaint by the NEC, meaning the body has until November 22 to resolve the Liberty Party's case, which was brought on October 23.

From then, the party has a week to appeal the decision, and the Supreme Court a week to decide on the appeal. The court also has the power to call fresh elections within 60 days if it decides to nullify the result.

"In a matter of days, we hope that there can be some conclusion to the investigation," said Musa Dean, a lawyer with the electoral commission.

Africa's first elected female leader, Nobel laureate Ellen Johnson Sirleaf, is stepping down after two terms spent transitioning her nation out of a long civil war, and the vote was seen as a marker of stability to buttress a fragile peace that has held since 2003.

A Supreme Court press officer told AFP that unidentified individuals pelted stones on Sunday night at the home of judge Sie-A-Nyene Yuoh but maintained the court "cannot and will not be coerced or intimidated."

The court found on Monday that the NEC had acted contrary to the law in declaring Weah and Boakai the top two candidates following an October 10 first round election, while a question mark over the validity of the votes was pending. 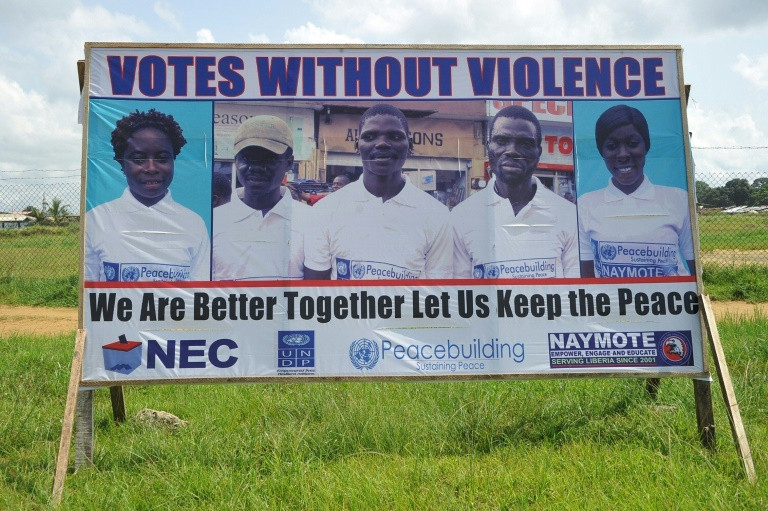 The 2017 presidential election is a key test of Liberia's stability. The country remains traumatised by civil wars that ran from 1989 to 2003, claiming a quarter of a million lives.

"By setting a date and proceeding to conduct a runoff election without first clearing the complaint of the petitioners which alleged gross irregularities and fraud, the NEC was proceeding contrary to rules which are to be adhered to at all times," Korkpor said.

The court urged the commission to hear the Liberty Party's complaint and resolve it with "urgent attention", given the "critical" nature of the presidential vote.

"The efforts to disenfranchise voters and undermine Liberia's democracy were grave enough to warrant intervention from the Supreme Court, and we are glad that after listening to our case and reviewing the indisputable evidence, the court agrees," said Liberty Party chairman Benjamin Sanvee, celebrating the ruling.

Liberia is no stranger to disputed election results: Weah's CDC party challenged but ultimately accepted the results of presidential votes in 2005 and 2011.

His party said it welcomed a chance to "look into the issues," but said the result nonetheless had been in Weah's favour.

"We think the will of the Liberian people was clear in that election that is it favoured the CDC," Phil Tarpeh Dixon, a CDC lawyer, told AFP.

The court case comes at a tense moment in Liberian politics, as Brumskine and Boakai have both accused Sirleaf of "interference" in the elections and of secretly supporting Weah over her own vice-president, claims she has strongly denied.