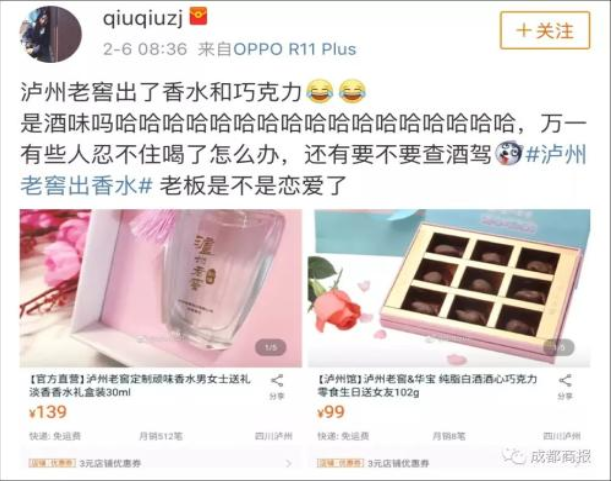 Founded in 1573 during the Ming Dynasty, the Sichuan liquor is a national treasure.

Given its long-standing reputation, this latest cosmetic endeavor has stunned many loyal fans as they try to figure out the perfume connection.

With a simple name, Luzhou Laojiao Wanwei Perfume, many think the product was designed to attract younger women to the overall brand.

Brand analysts have said it is an effort to connect with China’s young adult demographic.

Traditional Chinese liquor has waned in popularity among young Chinese drinkers who have developed a taste for wine and craft beer.

Some liquor companies have adjusted their marketing campaigns using slogans that read,“Winning the next generation.”

China’s netizens have applied a sense of humor to the perfume announcement.

Some of the funnier comments posted online include:

"What's the alcohol percentage of the perfume."

"Will I get drunk and receive a ticket if I use the perfume?"

“Should we expect to see LV sausages and Chanel milk powder in the near future?”

According to the National Business Daily, the company sold through its entire stock of 20,000 units within 48 hours as a result of the social media attention this week, Luzhou Laojiao said on Sina Weibo Wednesday.