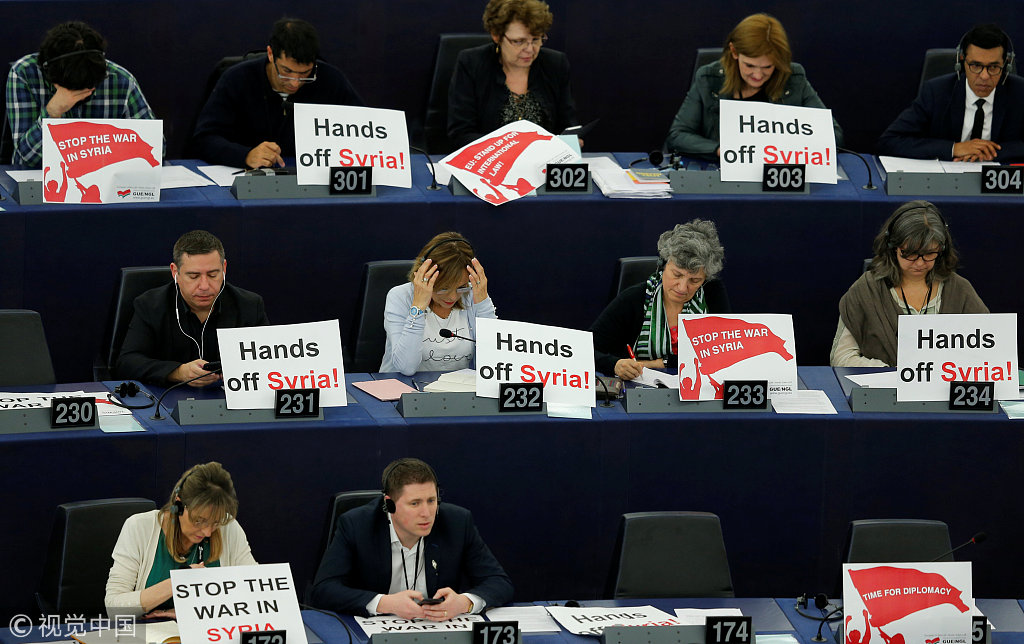 Members of the European Parliament display placards "Stop the War in Syria" on their desk, Strasbourg, France, April 17, 2018. (Photo: VCG)

When Macron entered the Parliament's chamber at the start of the debate, Sinn Fein MEPs led a protest against the airstrikes — shouting and displaying placards declaring "Stop the war in Syria,” "Stand up for international law" and "Hands off Syria.”

Sinn Féin is an all-Ireland party striving to establish a united democratic socialist republic. The party wants a Europe of Equals — a partnership of equal sovereign states, promoting peace, demilitarization, nuclear disarmament and the just resolution of conflicts, co-operating in social and economic development in Europe and beyond.

Explaining the protest by herself and fellow Sinn Fein MEPs against the attack by Britain, the US and France, Martina Anderson told the Belfast Telegraph on Wednesday, "We held up signs calling for an end to the bombing and an end to the war in Syria, which has brought untold misery to millions and created a huge humanitarian crisis."

She also hit out at the "bizarre spectacle" of Macron addressing the European Parliament in Strasbourg "about upholding democratic values just days after dropping bombs on Syria.” Anderson said, "What we need to see is a humanitarian response, not a military response which will only add to the pain and suffering."

GUE/NGL President Gabi Zimmer, who is from Germany, condemned the military intervention in Syria by the US, France and the UK during the debate. “We must ensure that the parties come back to the negotiating table instead of playing games and feeding their egos. These reckless acts endanger the lives of hundreds of thousands of people,” Zimmer said.

GUE/NGL is the abbreviation for the Confederal Group of the European United Left/Nordic Green Left in the European Parliament. It’s a group of 52 members from 19 different political delegations and 14 member states. What unites them is the vision of a socially equitable, peaceful and sustainable European integration process based on international solidarity.

MEP Marisa Matias from Portugal questioned the sincerity of EU countries that claim to care for the Syrian people. “When Syrians needed solidarity as they were fleeing war and terrorism, the EU turned the other cheek. They allowed for the largest refugee crisis in history to happen — only to then use the refugees to fuel a discourse of hate, racism and xenophobia,” she said.

“When they were most desperate, no one was there for the Syrians — like today. Anyone who lauded this clear violation of international law does not care about the Syrian people,” says Matias. “We need courage and strength to condemn this attack — the same courage and strength some people use for condemning the actions of Bashar al-Assad and Russia. The only people we must continue defending are the Syrian people. This world is being led by madmen and if we normalize them, we become complicit in their crimes.”

“The attack took place without there being a shred of evidence, and before the conclusion of the OPCW investigation and in clear disregard of Article 7 of the Treaty of the Union that requires the approval of the UN. By allowing the US to be judge, jury and executioner, we have replaced diplomacy with the law of might. It is absolutely undemocratic and illegal that neither the US, nor the UK or France have consulted their parliaments for this act of war, and which was only celebrated by terrorists and all those who wish to see an end to the United Nations Charter," Couso concluded.